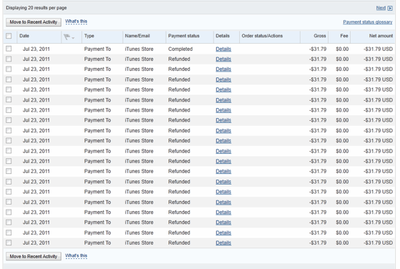 Clearly Mr. Christman didn't need 122 copies of Lion, and something has gone awry. John got in touch with both PayPal and Apple support, but said both sides pointed fingers at each other. "Apple Blames PayPal, PayPal blames Apple. They both are claiming to investigate, but I am stuck broke for three days now."

Christman thinks it is related to the new iCloud feature that allows iTunes to automatically download previous purchases:

I fresh installed Lion, because the upgrade caused a lot of problems. My system needed as fresh start anyway.

As each download started it charged me $31.79. Some apps came fast, some took longer, but the timing was directly related to when a new app started to download.

He downloaded 116 apps total, but noted that several apps failed to download and needed to be restarted. 116 apps downloaded and 121 extra charges seems too close to be mere coincidence.

Christman isn't the only person to face these issues surrounding Lion and PayPal. There is a lengthy discussion on Apple's support website about the issue, and other bloggers have run into similar problems.

Even though the purchases above say "refunded", Christman says he hasn't seen a dime. "Apple claims there was only one transaction. When I told PayPal to dispute them, they closed the cases and marked the items as refunded on the 23rd. Bear in mind all this money was taken and never returned yet."

"My mortgage is due in 2 days, and thanks to them, I don't have the money."

MacRumors reached out to Apple for comment, who said they would work with John directly to try to get his issues resolved.

Kognito
How do you think Apple made Lion so cheap for the rest of us?
Score: 43 Votes (Like | Disagree)


Did you even read the story? He didnt click anything 122 times, he clicked "download all" and for every app download it also somehow charged him for a copy of Lion.
Score: 42 Votes (Like | Disagree)

addicted44
If he had followed my motto, he would have been fine.

I don't think there is a more ethically challenged company of similar size than Paypal. Just need to google a little bit to hear all the horror stories.
Score: 42 Votes (Like | Disagree)


Are you psychic? Did you watch him click purchase 122 times? This isn't the only report of this happening.
Score: 41 Votes (Like | Disagree)

I guess he should've linked his itunes account to a credit card. That way he could still pay his mortgage.


Or Apple could have made less of an arse of his purchase in the first place?
Score: 41 Votes (Like | Disagree)

Having used ebay & paypal since day 1, is it me or have both gone steadily downhill?
Score: 40 Votes (Like | Disagree)
Read All Comments

Thursday September 29, 2022 1:08 pm PDT by Juli Clover
The third beta of iOS 16.1 that was released earlier this week expands the Adaptive Transparency feature introduced with the second-generation AirPods Pro to the original AirPods Pro. As noted on Reddit, first-generation AirPods Pro owners who also have the AirPods beta software will now see an "Adaptive Transparency" toggle in the AirPods section of the Settings app. The 5A304A beta...
Read Full Article • 116 comments