Just like early reports on the new MacBook Air released yesterday, the new Mac mini is also showing significant improvements in raw performance over its predecessor machines. Mac mini web hosting company Macminicolo.net has obtained both standard and server models of the new line and put them through some preliminary benchmarking using Geekbench. 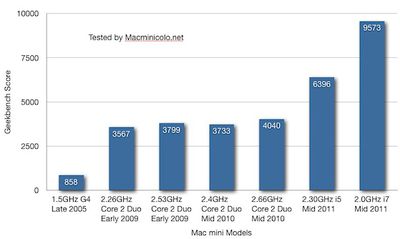 The testing reveals significant performance improvements for the Mac mini, with the entry-level 2.3 GHz Core i5 model showing an over 50% jump in Geekbench scoring over earlier generations and the 2.0 GHz Core i7 server model showing even more impressive results with its Geekbench score coming in at well over double that of its predecessor.

As we noted on yesterday's MacBook Air report, Geekbench focuses on raw processor and memory performance, and real-world performance will also depend on other aspects of a system including graphics capabilities and data storage components.

The report also offers a few unboxing photos and some shots of the initial setup process in which the Mac mini server model offers to migrate from an existing server setup. Also noted is the fact that the server edition includes iLife apps, as the server portion of Lion is simply an add-on for the basic OS X Lion. Under Mac OS X Snow Leopard, iLife apps were not included on server machines.

AAPLaday
The top spec mini getting dedicated graphics is a great move.
Score: 11 Votes (Like | Disagree)

The top spec mini getting dedicated graphics is a great move.

But not the Server model.
Score: 9 Votes (Like | Disagree)

Eidorian
So Core 2 Duo is dead now? About time.
Score: 9 Votes (Like | Disagree)

Lion does not support Word/Excel for Mac? Right?

There is actually a BTO option to have the high-end model configured with 2 discs just as the server model.

And the server model seems to have only a 2.0GHz Core i7 compared to the 2.7GHz Core i7 for the high-end BTO option, which means the high-end model is really the best and fastest on every spec.

I would be interested to see how thermal-constrained both models are. (AKA: How often they each turbo up.) If the server model is less thermally constrained, then it might turbo up to being faster on two cores than the desktop model (if the discrete GPU causes the whole thing to have thermal issues, it's possible.)

I would love to see some comprehensive light gaming benchmarks comparing the discrete graphics desktop model to the server model. (Which, if you upgrade both of their storage options to 750 GB spinning + 256 GB SSD, cost exactly the same, with the only difference being dual core 2.5GHz+discrete vs. quad-core 2.0GHz+integrated.)
Score: 5 Votes (Like | Disagree)
Read All Comments

Tuesday January 24, 2023 1:11 pm PST by Joe Rossignol
While the new Mac mini with the M2 chip has a lower $599 starting price, the base model with 256GB of storage has slower SSD read and write speeds compared to the previous-generation model with the M1 chip and 256GB of storage. A teardown of the new Mac mini shared by YouTube channel Brandon Geekabit reveals that the 256GB model is equipped with only a single 256GB storage chip, while the...
Read Full Article • 597 comments