MiniDisplay Port to HDMI Cables 'Unlicensed' and Cannot Be Sold

Mini DisplayPort to HDMI cables, such as those used to connect recent-generation MacBook Pro's to high-definition televisions do not comply with the official HDMI specifications.

HDMI Licensing, LLC, the trade group that controls adoption of the HDMI specification, explained the situation to TechRadar UK:

The HDMI specification defines an HDMI cable as having only HDMI connectors on the ends. Anything else is not a licensed use of the specification and therefore, not allowed.

Basically, a cable that has a HDMI connector at one end and a Mini DisplayPort connector at the other is not a "true" HDMI cable, and is thus, by definition, outside the HDMI specification.

As a result, these cables are considered unlicensed by HDMI Licensing and are not to be sold. Mini DisplayPort to HDMI cables can still be found, for example at the Apple Online Store -- but some retailers, like MonoPrice.com, have already discontinued their mDP to HDMI offerings.

Instead, users can buy Mini DisplayPort to HDMI Female dongles. These dongles, when combined with a standard HDMI-HDMI cable, connect MacBook Pros, and other devices with mDP ports, to high-definition televisions and desktop monitors that accept HDMI.

Most Macs made in the past 18 months support multichannel audio passthrough via Mini DisplayPort. This means that users can connect one cable from their computer to a HDTV or surround sound system, and it will carry audio and video signals over the single cable. 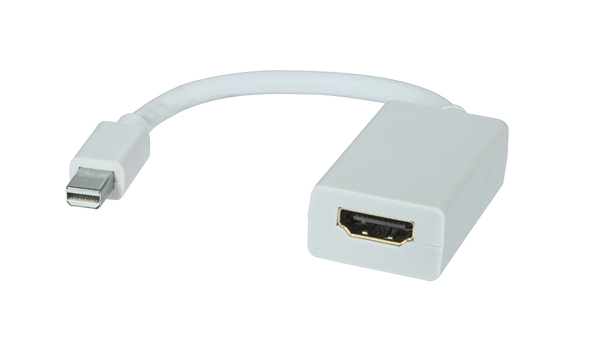 That looks ****ing ridiculous. If you pay them their 5 cents per device why can't they be happy?
Score: 21 Votes (Like | Disagree)

Silentwave
So what does that mean for all the HDMI-DVI cables I have lying around?

Apple should just stop with their own priority ports and implement a HDMI port on macbooks. Stupid enough that you have to buy an adapter to use any non-apple monitor.

If you meant to call MDP proprietary, you would be wrong. Apple doesn't own the standard, it's part of the Displayport standard - a VESA standard.

HDMI is actually more proprietary than MDP is.

Doctor Q
Why does HDMI Licensing, LLC have influence over sites like MonoPrice?

Why can't retailers continue to sell cables that people want even if the cables don't have an "industry certification"?
Score: 12 Votes (Like | Disagree)

Apple should just stop with their own priority ports and implement a HDMI port on macbooks. Stupid enough that you have to buy an adapter to use any non-apple monitor.


While I agree with your point, Apple isn't using a proprietary (I assume that's what you meant) port. mDP is a standard used by a bunch of computer companies, most notably favored by Dell. It's clearly a better technology for monitors. But, like I said, I agree with your point and think there should be an HDMI port on Apple laptops.
Score: 11 Votes (Like | Disagree)
Read All Comments