Thursday July 7, 2011 7:57 am PDT by Eric Slivka
Earlier this week, the browser-based JailbreakMe.com solution went live once again, bringing a simple new method to jailbreak a number of iOS devices including the iPad 2. The tool has proven popular, with over one million users already having taken advantage of it. 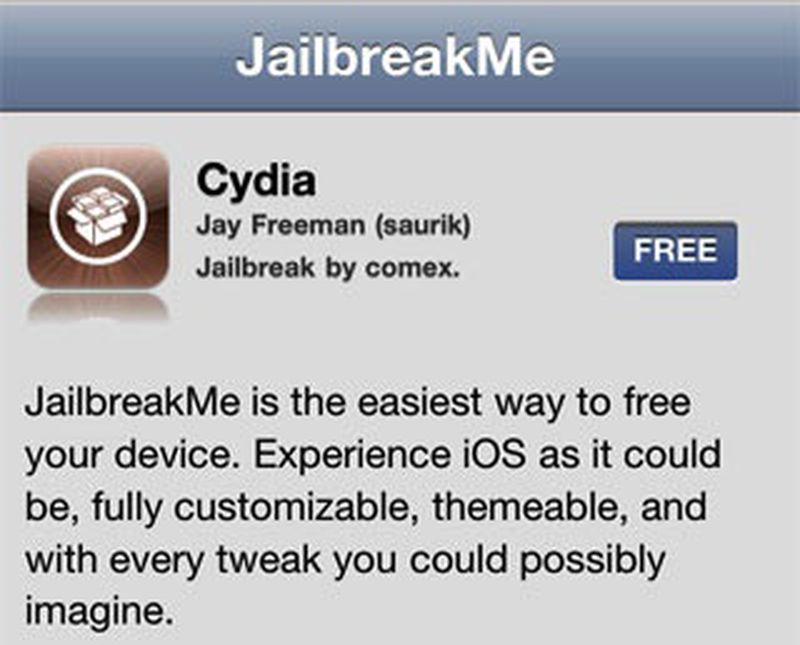 Similar to earlier browser-based jailbreak mechanisms, the latest version takes advantage of a flaw in the way Safari handles PDF files, a vulnerability that could also be exploited by malicious parties. Consequently, it had been expected that Apple would move relatively quickly to patch the hole once it was revealed by the jailbreak procedure.

According to the Associated Press, Apple has indeed confirmed that it will be patching the hole in a future software update, but declined to provide a timeframe for the release of the update.

Apple Inc. spokeswoman Bethan Lloyd said Thursday the company is "aware of this reported issue and developing a fix that will be available to customers in an upcoming software update."

She declined to specify when the update would be available.

Apple's statement comes after Germany's information technology security agency issued an explicit warning about the "critical weaknesses" in iOS that could result in malware being deployed through infected PDF files.

Fully aware of the potential implications of malware authors exploiting the hole, the jailbreak community has already developed a fix for the issue, which was released into the Cydia Store for jailbroken devices alongside the new technique. Users who have jailbroken their devices, even through the new JailbreakMe.com technique, can thus patch the vulnerability, while non-jailbroken devices will have to wait for Apple's solution to be released.

locust76
Jailbroke my iPad 2 today, worked too damn well... then I looked around in Cydia and couldn't find anything I wanted that wasn't already coming for free in iOS 5... Guess I'll wait for 4.3.4 to get rid of the jailbreak and Cydia...
Rating: 8 Votes

Apple can work fast when patching stupid JB holes, but we're still stuck with buggy-as-hell beta 2 for iOS 5 after a month.

This is it! I am leaving Apple for good.

Where would we all be if Apple released things on their schedule.
This is an outrage. How dare they!

In case you were serious:

May I suggest you contact Apple and PLEASE let them know that your time schedule is of the utmost importance and urgency?
Rating: 6 Votes

2 Owls
My jailbreak lasted a day, didn't see the point to be honest, from the fuss over it.
Rating: 6 Votes

I love how apple calls this a "fix"


You do understand that jailbreaks work because they take advantage of a security vulnerability SO HUGE that they can actually rewrite parts of the device operating system, install entire apps that sidestep the normal install process, hack all kinds of system settings...

You don't consider that the tiniest bit dangerous? You'd rather Apple just leave it out there? Surely nobody would ever exploit such a vulnerability for evil, because hackers are all looking out for our best interests, right?
Rating: 5 Votes

powers74
In other news -

Prisons across the nation are trying to keep inmates from escaping...

But actually, I appreciate the jailbreakers for both giving those who are willing to go through the process added functionality, and also exposing flaws in the OS which ultimately makes it more secure. And also challenges Apple to add features that the jailbreakers introduce. Win win really.
Rating: 5 Votes

Sorry, but i respectfully disagree. I have jailbroken iphone, and have everything off...WiFi, 3G, data, location, push. As such 2 day off a full charge, i am still in the 90 percentile.....Jailbroken or not, you just have to be smart about whats on and whats off. Also, use SBSettings and Remove Background Toggle, to always have a wiped-clean multi-tasking pane...nothing should be running when not in use.


My iPhone 4 easily lasts several days with light usage. That's with all those things you had listed turned on. What's the point in having a device with such features if you've got them off all the time?
Rating: 4 Votes

And please don't come with some safety nonsense arguments. For those of you who can read German, here is what the German BSI has to say about the security of iOS:

So, no, iOS is by NO MEANS safer just because Apple cripples your experience. The mere fact that you can jailbreak iOS by simply visiting a website already negates that argument.

Apple's curation has no effect on the number of zero-day exploits for a given platform. So, I don't see how the security layer added by curation is affected (or even negated) by zero-day exploits.
Unless you think that curation means zero security risks (beyond social engineering), I never did and nobody claimed as much. And the German authorities make no reference to Apple's curation in the link you posted.
Rating: 4 Votes

Apple can work fast when patching stupid JB holes, but we're still stuck with buggy-as-hell beta 2 for iOS 5 after a month.


Beta 2 has only been out two weeks today.
Rating: 4 Votes

... its exploiting Apples own flaw that they have known about for a couple of years, but failed to fix.