The JailbreakMe.com website has returned to offer an entirely browser-based jailbreak tool for iOS devices including (for the first time) the iPad 2. 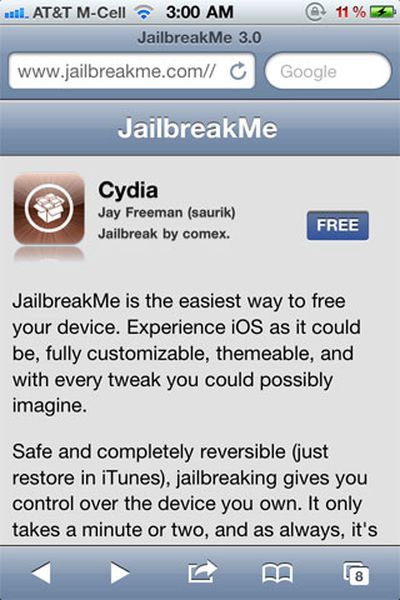 Jailbreaking is a process by which Apple's iOS devices can be opened up to allow for installation of non-Apple-approved applications, customizations and file access. Apple officially disapproves of jailbreaking and has even warned users that these unauthorized modifications can cause "instability, disruption of services, and compromised security." Still, a large and active jailbreak community has emerged over the years since the iPhone's introduction.

A Dev-Team blog post outlines the supported configurations for JailbreakMe:

The JailbreakMe site is unique in that it allows users to jailbreak their devices entirely using the Safari browser and without downloading any additional software. The site itself also offers a Frequently Asked Questions page that reassures users that the jailbreaking process is fully reversible with a simple restore and that there is no risk for any permanent damage. Still, we'd recommend users proceed with caution. The installation process involves simply visiting JailbreakMe from a supported iOS device and tapping "Free/Install" button to initiate the jailbreak.

The browser-based jailbreak process again exploits a flaw in Apple's PDF renderer that allows the tool to open up the device. Just like the previous vulnerability, Apple is expected to patch this one shortly. This same vulnerability could be exploited by malicious parties as well. The programmers of JailbreakMe are also providing a patch to close the security hole behind them for jailbroken users. Users of non-jailbroken iOS devices, however, will have to wait until Apple provides a fix.

More information and answers can be found in our respective "Hacks" forums for iPhone, iPod touch, and iPad.

I'm no expert in jailbreaking, but doesn't it slow down your device?


It's not the jailbreaking that slows your phone down, its all the background process that some idiots install. Some tweaks do it too, as well as springboard replacements (pogoplank)
Score: 8 Votes (Like | Disagree)

xUKHCx
Takes me back to the days of iOS 1.x.x, fond memories.

Apple will not like this as it is a genuine security risk. This will be fixed much more quickly than the other tethered types of jailbreak.
Score: 7 Votes (Like | Disagree)

PDF is a security hellhole.

No it isn't. It's a document format. Apple's implementation of the PDF viewer apparently sucks, though. AFAIK there are also problems in Preview.app on OS X but at least you can't get root access from there.
Score: 6 Votes (Like | Disagree)


Jailbreaker/Homebrewers are free to not buy these locked down products, there are open alternatives (Android/Desktop PC) out there for them to use.


Actually, we are free to do whatever we want with our own fully purchased phones. Too bad for you we live in a free world, your orwellian dream truly scares me.
Score: 5 Votes (Like | Disagree)
Read All Comments