A cell phone picture, purported to be an iPhone running on China Mobile's proprietary 3G network, is making the rounds after being posted on Chinese news site MyDrivers.com (English translation). 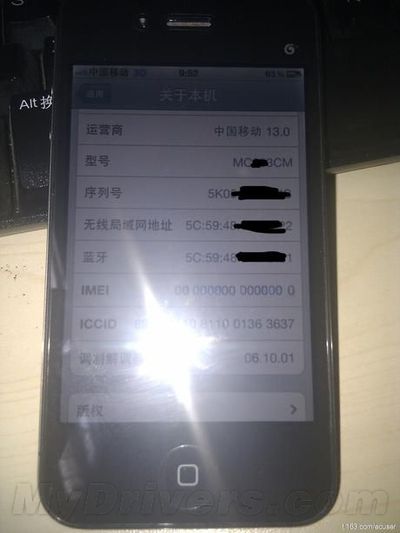 In the picture, we can see the China Mobile 3G logo in the upper right corner. The third number down, which is partially blacked out, is part of the serial number. The third digit, a 0, suggests the phone was made in 2010. The next digit, which appears to be a 5, would have the phone manufactured towards the end of that year, in either the 50th, 51st or 52nd week.

Additionally, the carrier name in the top left corner appears to be China Mobile, written in Chinese text. None of this is conclusive, but it does suggest a China Mobile compatible iPhone is coming to CM's 3G network sooner rather than later.

China Mobile is a strategic partner for Apple. It has a 70% market share in the world's most populous country with more than 600 million subscribers. In November of last year, China Mobile began assisting customers who wished to use the iPhone 4 on their network, including in-store assistance cutting its full-size SIM cards down to micro-SIM size.

Update: As noted by the Shanghai Daily, China Mobile chairman Wang Jianzhou today reported that the carrier already had 5.6 million iPhone users on its 2G network as of the end of May, with 700,000 of those having been added during that month alone.

WHy cant they ever take better pictures of prototypes?


It's the same folks who film flying saucers and yetis.
Score: 5 Votes (Like | Disagree)

You get some serious forum milage out of that one aapl share you inherited. You don't get paid a dividend on your share and there's no way you'd sell your one talking point. So tell me again why this is significant to you?


There are other Apple shareholders in this forum besides cvaldes. And it's interesting to all of us tracking Apple closely even if for no other reason than curiousity. This isn't an "Apple USA Products" rumor site.

The fact that I'm traveling to China next month and debating a possible move there one day makes it interesting as well.
Score: 4 Votes (Like | Disagree)

Day48
WHy cant they ever take better pictures of prototypes?
Score: 4 Votes (Like | Disagree)

Lulz. So tell me again why this is significant to you?


This is very significant for Apple and last I checked, this site is not a Western-centric MacRumorsUSA. News of an impending, soon-to-be-released iPhone 4 running on the world's largest mobile phone carrier is a very big deal.

If you truly are an Apple enthusiast or follower, regardless of whether you are an AAPL shareholder or your political beliefs, I am quite sure you will agree. :apple:
Score: 3 Votes (Like | Disagree)

What I want to know is if the average Chinese worker makes a $300 a month... how can they afford an iPhone? :confused:

The iPhone would be marketed to China's high-end consumers, not the ordinary factory worker.

China also manufactures boatloads of cheapo handsets that are targeted to the mass market.

You think everyone who works at Boeing has a 747 in their driveway?
Score: 3 Votes (Like | Disagree)