As briefly noted by Patently Apple yesterday, Apple has finally been awarded a key patent related to the iOS user interface as implemented on the original iPhone. Originally filed in December 2007, the patent application incorporated several previous provisional patent applications dating back to January 2007 when Apple first unveiled the iPhone six months ahead of its launch. 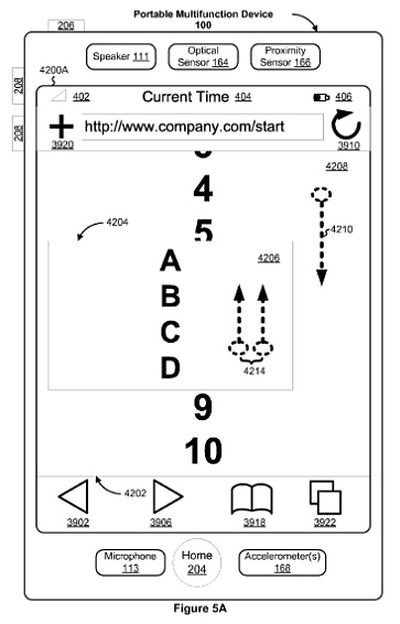 While the newly-granted patent does not reach the scale of "The iPhone Patent", a 358-page monster patent granted in January 2009 and carrying Steve Jobs' name as an inventor, it does specifically address some basic multi-touch functionality including providing users with the ability to pan around the screen while touching the screen with some number of fingers but panning around a specific frame within the displayed content using a different number of fingers. In essence, the patent describes the basic concept of navigating around webpages with a one-finger touch while also being able to to use a two-finger touch to independently scroll within an embedded frame.

PC Magazine takes a look at the implications of the granted patent, noting that the covered material is broad enough to pose potential problems for other smartphone manufacturers employing capacitive multitouch interfaces on their devices.

It gets quite a bit more technical in its full form, but there's one thing patent experts consulted by PCMag agree on -- Apple has been awarded an incredibly broad patent that could prove to be hugely problematic for other makers of capacitive touch-screen smartphones.

Apple's patent essentially gives it ownership of the capacitive multitouch interface the company pioneered with its iPhone, said one source who has been involved in intellectual property litigation on similar matters.

Apple has already filed infringement lawsuits against a number of its competitors in the smartphone industry including HTC and Samsung, making good on promises that the company would aggressively defend its intellectual property behind the iPhone.

Update: There has been some dispute over just how broadly-applicable Apple's patent is, with a number of readers taking exception to PC Mag's claims of the patent being "hugely problematic" to Apple's competitors. We agree that the scope of the patent is considerably narrower than it would appear from PC Mag's statements and refer readers back to our description of what the patent does in fact cover: the recognition of differing numbers of fingers used as input for scrolling or panning around displayed content either in its entirety or in a smaller subset embedded with a frame.

While the patent doesn't nearly cover the entire graphical interface and multitouch functionality of iOS, it is one more piece in a puzzle of patents that Apple has pieced together to protect a significant portion of the iPhone's functionality.

jamesryanbell
Everyone give up. Apple won. Figure out something innovative on your own.

NebulaClash
This makes sense. Apple may not have invented touch screens, but their specific mult-touch gestures seemed to be uniquely Apple when the iPhone first came out. Now, of course, people copied them and they are in use all over the place, but back in 2007 . . . not so much.
Score: 19 Votes (Like | Disagree)