Spotify is finally (almost) ready to launch in the U.S., closing deals with three of the four big music labels -- Warner Music, predictably, is the lone holdout -- and a massive funding round, raising $100 million at a $1 billion valuation.

Spotify is a freemium music service, offering both free and paid subscription offerings, similar to Pandora. Spotify lets users listen to whatever songs they wish, in whatever order they wish, rather than building "channels" of like music on Pandora. 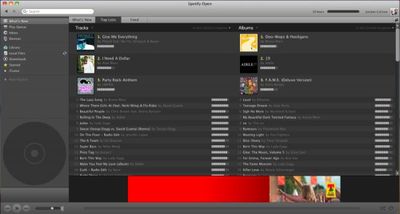 Spotify has a significant presence in Europe, with more than 1 million paid subscribers and 6 million ad-supported free users. In the US, it may face a more uphill climb with heavy new competition from from Google, Amazon, and Apple, plus there are existing music services from Rhapsody and the aforementioned Pandora. In fact, Apple has been rumored to have made efforts to prevent Spotify from being able to launch in the U.S.

Spotify plans to charge around $10 per month for its premium service, and allows users to stream millions of songs they don't own.

The company, founded in Sweden but based in London, raised $100 million from Digital Sky Technologies, Accel and Kleiner Perkins, all heavy hitters in the venture game. DST is a major investor in Facebook, which might help the two companies to make a deal. Spotify and Facebook are working on a "significant integration" according to All Things D's Peter Kafka, though that isn't tied to the U.S. launch. Facebook co-founder and CEO Mark Zuckerberg is a known Spotify fan.

Spotify has a decent war-chest, plus proven success and buzz from its European operations. If it can ink a deal with Warner, it might actually, finally, launch on this side of the pond.

"Apple has been rumored to have made efforts to prevent Spotify from being able to launch in the U.S."... Wow so Apple's just being Apple. I get it now.

"Apple has been rumored to have made efforts to prevent Spotify from being able to launch in the U.S."... Wow so Apple's just being Apple. I get it now.

But they are very different services.

TheJing
I've used Spotify for years now because I'm in Sweden during the summers and it is AMAZING. Give it a try. You won't be disappointed.
Score: 6 Votes (Like | Disagree)

Every digital company competes with Apple now days. I want to hear MacRumors, not rumors from their competitors.


Spotify as an app is available for both the mac and the iOS app store. If you don't want to read the article then you don't have to.
Score: 3 Votes (Like | Disagree)

What has this "rumor" to do with Mac? This isn't MediaRumors or AudioRumors. Its MacRumors. Spotify isn't a Mac-Only app. It doesn't even have an iPad version. Apple has nothing to do with the company. So why it on the front page?

Can't understand why this story is still getting free advertisement all over. There are other music services out there.


It competes with iTunes, which is made by Apple.
Score: 3 Votes (Like | Disagree)

I'm not a fan of Spotify. I've had a Premium subscription for the last month and still isn't doing it for me.


What do you mean gapless playback? I've never had any issues with buffering or time between tracks.


160kbps streaming only to the iPhone, which sounds dreadful

Again, give me a break.


Can't be streamed around the house

Except to anything with Airplay, or a Sonos. What else are you looking for?

Are you really saying that an app doesn't compare to a record store? Really? Wow.


Artists don't get paid, simple as.


I'm a sound engineer, and having recorded quite a few artists who have appeared on both iTunes and Spotify, I know the damage Spotify does to their income. Using CD Baby, your music appears on Spotify after it appears on iTunes, and every time, iTunes income drops significantly when listeners switch over to Spotify. The income for musicians from Spotify is insignificant, verging on non-existant.


I'm an artist, and I know that if you have stuff that people actually listen to, you get a decent supplemental income from Spotify. Artists don't make money from recordings these days, regardless of the medium. You used to tour in order to sell more albums. Now you record albums to enable touring.
Score: 3 Votes (Like | Disagree)
Read All Comments

Monday January 24, 2022 9:20 am PST by Juli Clover
AT&T today announced the launch of upgraded AT&T Fiber plans, which support speeds of up to 5 Gigabits for some customers. There are two separate plans, one "2 GIG" plan and one "5 GIG" plan, available to new and existing AT&T Fiber subscribers. According to AT&T, the new plans are available to nearly 5.2 million customers across 70 metro areas including Los Angeles, Atlanta, Chicago, San...
Read Full Article • 241 comments