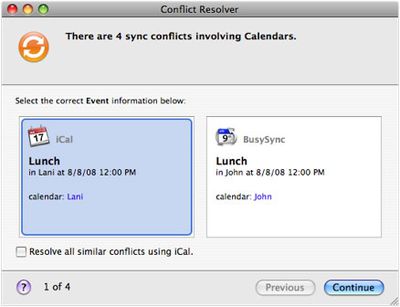 MobileMe's sync conflict resolver. Via BusySync
When it runs into conflicting data, Apple's upcoming iCloud service will automatically determine which is the correct one without bringing the user into it, according to Daring Fireball's John Gruber. Speaking on The Talk Show with Dan Benjamin, Gruber lays out what he believes to be iCloud's course of action in dealing with sync conflicts: (via MacStories)


In iCloud, I believe you will never be presented with [a sync conflict] dialog, no matter how much has changed in one of the instances while it was "offline". The server-side iCloud, when there seemingly is a conflict, will make a decision and it will decide which one is the best (in Apple's terms the "truth"). That is what Steve Jobs means when he says "The Truth is in the Cloud." iTunes will decide which one is right and that's it. iCloud will push that right one to any device that has this account that has a different version.

But, here's the trick – what happens if it's not the right one? On the server side, it will remember all of the other ones, almost like versioning. There will be some sort of interface like "go and look at your contacts." There will be some sort of way to say "show me previous versions and let me pick the one that is right". You pick it and push it back up into the cloud and tell it "that's the truth" and Apple will push it out.

Currently, MobileMe pops up a dialog box (shown above) forcing users to resolve conflicts, before a sync can continue.

Apple hasn't officially revealed many details about exactly how its new services are going to work, iTunes Match nor the other various bits of iCloud. Gruber claims this isn't just a theory, that he knows is sure this is how iCloud will work. We'll know more when iCloud launches this fall.

How will I know that one of my syncs didn't result in "the truth" so I need to check my versioning?


When you turn up for an appointment a day too late?
Score: 14 Votes (Like | Disagree)

Gruber is full of it. He doesn't even understand enough computer science to know WTF he is talking about.

ARN, I know you have a crush on Gruber, but you have to start recognizing that he's just pulling stuff out of his ass most of the time.

It is pathetic how people fall for this from him time and again.... and of course, nobody goes back and notices when he gets it wrong.


And where you replied with the same "Gruber is always wrong" rant: https://forums.macrumors.com/showpost.php?p=9523217&postcount=36

econgeek wrote in March, 2010:
-- Front facing camera. A perennial feature request from the mac rumor mongers that does not make much real sense.

When the new [iPhone 4] doesn't have a front facing camera, will you strike gruber from your reliable rumors list? Or will he get to slide because he was "obviously being sarcastic"?


So, let me ask you this time. If the auto-resolve sync conflicts thing turns out to be true will you add gruber to your reliable rumors list, or are you just going to keep ranting about us publishing his rumors?

Doctor Q
How will I know that one of my syncs didn't result in "the truth" so I need to check my versioning?
Score: 7 Votes (Like | Disagree)

When you turn up for an appointment a day too late?

Small White Car
Although they seem to be dabbling in guesswork I have to imagine that they're right. I can't imagine that Apple would come up with file-versioning in Lion and somehow ignore such features on the cloud side.
Score: 4 Votes (Like | Disagree)

If my secretary adds an appointment to my calendar (remotely via the office) after I've already booked something myself, it's likely her newer entry will not be "the truth" at all, and my prior appointment will be written over. I could then miss my proper appointment because I didn't "verify" it prior, and that would suck.
...sorry, got carried away there.

The bit you're missing is that with iCloud, when you book something yourself it automatically gets pushed to the calendar your secretary sees, so she never adds a conflicting appointment in the first place. The pervasive concurrency of data is going to stop a lot of these conflicts happening, so the process of resolving them is required less often, and eventually becomes unnecessary.

People worrying about whether iCloud can possibly know which is "the truth" are not seeing the wider aim of Apple, which is to eliminate the possibility of conflicts happening at all.
Score: 3 Votes (Like | Disagree)
Read All Comments