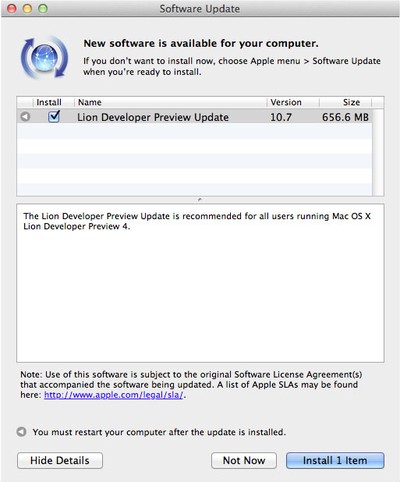 Apple seems to be putting the final touches on OS X Lion which is set to launch in July. They have pushed out a new software update for developers who are running the Developer Preview 4 that was released at WWDC.

There's no word on what has changed between versions. OS X Lion will be launching sometime in July for $29.99 via the Mac App Store.

Update: It's All Tech posts some of the changes found in the latest release. Perhaps most notable is that this build is not the final since there is still placeholders for some of the videos:


Let's let go of it. It was cool when it was actually necessary. Like 5 years ago.

Rosetta is done. Gone. You will never see it.
Score: 16 Votes (Like | Disagree)

pjhamill
Let me just add this, I really love Lion, every bit of the OS has had something fiddled with, it's a joy to use and the experience is a lot better than Snow Leopard. Once you use Lion it's hard to go back to Snow Leopard. Just my opinion.
Score: 12 Votes (Like | Disagree)

I know it was mentioned on MR about it being -18% in Australian due to it being a download and therefore can go with the current exchange rates, but it seems Apple Australia is doing whatever it wants using an exchange rate from a year ago!

So... you're pissing and moaning about 75 cents. Seriously.

EDIT: BTW, the US price does not include sales tax which varies between 4-10% for most US states. And let's not mention the average wage in the US compared to Australia, because that's just a massive can of worms...
Score: 11 Votes (Like | Disagree)


It's impossible for Rosetta to be added back at this point. All the system files are intel-only.
Score: 9 Votes (Like | Disagree)

justinfreid
And it's 2011 and it's time to leave PowerPC development to Microsoft's Xbox team.
Dual boot to Snow Leopard is still an option.
Score: 8 Votes (Like | Disagree)

No Classic either? :-)
Score: 7 Votes (Like | Disagree)
Read All Comments