Apple's Mac App Store-only strategy for the release of OS X Lion has brought consternation to some, particularly those in rural areas without reliable high-speed Internet and folks in enterprise and educational IT departments. However, for a large group of Mac users -- those outside the US and Canada -- the Mac App Store is a boon for the wallet.

Apple made significant price cuts to Lion compared to what the company charged for Snow Leopard. Because the price didn't change much in the US or Canada -- it rose 3% from $29 to $29.99 -- we can assume the main reason for the change in pricing is cost savings from digital delivery. 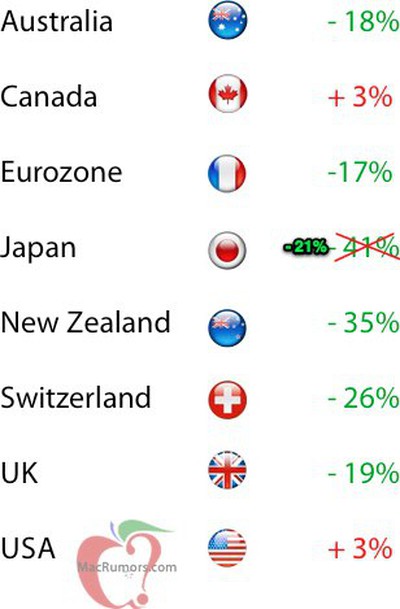 To get pricing for Lion and Snow Leopard, we examined each country's Apple Online Store and Lion launch pages. Some countries we looked at, notably China, Hong Kong, and South Korea, had no pricing announced for Lion so we skipped them.

Pricing was compared within individual countries so any VAT or taxation should be identical.

Update: As a commenter Halluxxx correctly points out, the pricing of Snow Leopard in Japan is Y3,300, not Y4,400. We regret the error.

Obi-Wan Kubrick
They should make a boxed copy a luxury item that can be ordered over the phone or online that can be mailed to those that live in low speed areas.
Score: 14 Votes (Like | Disagree)

Le Big Mac
It's ridiculous to conclude that the lower price is solely from online delivery. There's no way it cost Apple $100 tondistribute a DVD.

No the difference is a change in business strategy to get new OS updates into users' hands at a more affordable price. Why? Because Lion add to the system lockin attributes of the Mac ecosystem.
Score: 9 Votes (Like | Disagree)

I believe you need to move that decimal point over to the right a couple of digits. The App Store distribution method means there is no disc or disc image. It installs directly on the machine that purchases the OS software. How would it be possible to get this on 100 machines?

Same as you can do right now.
Score: 5 Votes (Like | Disagree)

mrkgoo
I think the main reason for comparative 'savings' is exchange rate. whenever apple releases a new product, the prices are fixed at US prices and the current exchange at that time.

Products go up and down in price. For example, the iPhone 4 in NZ was slightly cheaper than the iPhone 3GS at respective launches. I remember one year the MacBook pros increased in price by 20-30% but dropped again in the following refresh.

I assume that's why 99c songs and 99c apps aren't the same prices in non-US stores.
Score: 5 Votes (Like | Disagree)

chevman
calibrated for exchange rate differences between then and now?

calibrated for exchange rate differences between then and now?
Score: 5 Votes (Like | Disagree)