The Financial Times, a major business newspaper, has decided to drop its iOS app in favor of an HTML5 based web app specifically designed for the iPhone and iPad. The move is in response to Apple's new App Store Subscription requirements that state Apple must get a 30% cut of any subscription sold on iTunes and that publications must offer subscriptions through the App Store. 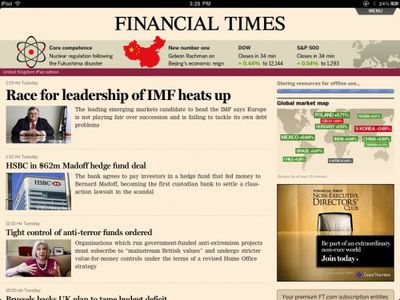 In a email to subscribers today, the FT didn't mention the App Store at all, instead touting "valuable improvements" including claims that the web app will be faster and more up-to-date. The interesting part came when the email mentioned the existing app (emphasis added):

Although the old app may still be available for an interim period, we encourage you to switch to the new app as soon as possible. The new app is now the focus of our development efforts and we'll be adding a series of new features, including special reports, over the coming months.

Actually, neither the Financial Times nor anyone else knows what is going to happen at the end of the month to subscription-based apps that don't align with Apple's App Store guidelines. The deadline for subscription based apps to roll out their offerings is June 30. Quoted in the New York Times, Rob Grimshaw, managing director of FT.com said:

We don't quite know what will happen ... we'd love to keep our app in iTunes, but it may be that they will block our app at the end of the month.

They might not know what's going to happen if they don't play ball, but it's Apple's sandbox and the FT isn't sitting around idly. The new web app seems to be very similar to the current iOS App and thus may be able to provide a very similar experience without having to share revenue with Apple. The Financial Times' loyal readership is likely to follow the publication to its web app in significant numbers, meaning that the FT may not be missing out on much by bypassing iTunes.

As the first major publication to drop its iOS app over Apple's subscription guidelines, the FT might just encourage other publications to make the same move. Ben Evans notes, however, that the grass isn't always greener on the other side:

The challenge for other publishers in following the FT is that by doing so, they gain 30% but lose frictionless installs from the app store and frictionless payment from iTunes. For the FT, with a dedicated readership willing to pay, it may be worth giving those things up in exchange for the ability to offer a true cross-platform experience. But if you're depending on impulse download, the tablet experience and the ease of payment to get people to pay for your product where they never paid before, paying Apple 30% of something may be better than keeping 100% of nothing.

theheadguy
Good for them. If you have the power and the will to survive without reliance on the Apple ecosystem, I say do it.
Score: 37 Votes (Like | Disagree)

dustinsc
Come on Apple. If you ask for 10% you'll keep your content providers and get a cut. I'm sure if you just quit pretending 30% is some sort of magic number, you'd make more money and have happier devs and customers.
Score: 23 Votes (Like | Disagree)

wordoflife
I'm glad they are doing this. Apple is being a bit too greedy.
Score: 18 Votes (Like | Disagree)

keruah
I love Apple, but hope that more companies will do the same.
Score: 18 Votes (Like | Disagree)

WiiDSmoker
Good. Hopefully Apple realize what a dickish move they are trying to make.
Score: 14 Votes (Like | Disagree)

BTW the FT web app DOES work offline. It stores 1 day of news on the device itself. HTML5 is very capable, and frankly this is a smart move on their part rather than try to support a ton of different devices.