Today, in addition to Lion, iOS 5 and the other iCloud features, Apple rolled out iTunes in the Cloud. The service is free for songs purchased through the iTunes Store, while a new "iTunes Match" service priced at $24.99/year extends the program to ripped music. 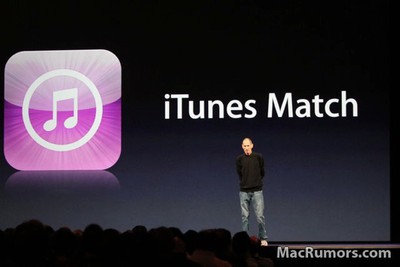 iCloud will attempt to ease the burden of syncing -- at least for songs purchased through iTunes. Previously-purchased songs will show up in a purchase history and any music purchased can be re-downloaded to any device at no additional charge. According to Steve Jobs, this is the "first time we've seen this in the music industry."

Using the new Automatic Downloads feature, content purchased via iTunes is pushed (not streamed) to mobile devices and vice versa. Users will consequently have all of their songs, automatically, wherever they are, on up to ten devices. The service is free for songs through the iTunes Store.

As far as ripped music, iTunes has 18 million songs in the music store and Apple will use a feature called iTunes Match to give users the same benefits on ripped songs matched to iTunes songs, as with purchased tracks. A user's library is scanned and matched and any songs that remain unmatched can be uploaded for syncing. Songs that are matched are upgraded to 256KBps, AAC, DRM-free, with all the benefits above, including push syncing and all the rest.

saxon48
So 25 bucks a year to legitimize several years' worth of downloaded music? Sign me up

MathijsDelva
Available in beta now in the U.S. only and requires iOS 4.3.1 on iPhone 3GS, iPhone 4 (GSM model), iPod touch (3rd and 4th generation), iPad, or iPad 2, or a Mac or PC with iTunes 10.3. Previous purchases may be unavailable if they are no longer in the iTunes Store. Download iTunes 10.3 free.

Unmatched content will be uploaded; upload time varies depending on amounts uploaded.

Uh, you have remembered that Google Music is only free WHILE IN BETA right? Oh, and I've got no problem with the charge for iTunes Match as:

a) a lot of content uploaded WILL be pirated and they're effectively licencing it all when you do upload.

c) most importantly, I don't have to spend WEEKS (and I'm lucky, unlimited uploads, most would have to batch this over months) uploading my data and clogging my internet connection in the process. That's easily worth $25.
Score: 6 Votes (Like | Disagree)


I disagree. This will be huge, no one else can come close and for $25.00 per year it is kinda like an tax paid to the labels. Let's face it only about 1 in 40 songs on the typical iTunes library was paid for.
Score: 6 Votes (Like | Disagree)

1. If I sign up and it matches my ripped music, does it then let me download the matched version from iCloud to keep forever?

2. What happens when I stop paying for this service? Do I keep the downloaded music from iCloud or does it revert to my old copies of music?

Disclaimer: I'm just answering based on how it sounds like it will work...
Score: 5 Votes (Like | Disagree)
Read All Comments

Monday August 2, 2021 8:00 am PDT by Sami Fathi
The iPhone 13 is widely expected to come with Wi-Fi 6E capabilities, and while it may seem rather nuanced to the average consumer, with only improved speeds and being "up to date" in the realm of Wi-Fi technology, it's actually a fairly significant improvement, laying the groundwork for much of what we know the future holds. To truly understand Wi-Fi 6E, MacRumors sat down for an exclusive...
Read Full Article • 64 comments

Monday August 2, 2021 3:22 am PDT by Tim Hardwick
YouTube is piloting a new cheaper subscription tier in Europe called "Premium Lite," which offers ad-free viewing minus YouTube Premium's other features. First spotted by a user on ResetEra and subsequently confirmed by Google, the "Lite" plan means users who aren't interested in offline downloads or background playback can still enjoy YouTube videos on web and mobile app without being...
Read Full Article • 133 comments