After giving the stage over to Phil Schiller and Scott Forstall for much of today's WWDC keynote, Steve Jobs himself introduced iCloud to the world.

Noting that devices have changed over the past decade, with people now using photos and videos on the go, the PC should no longer be the hub for your digital life, with all media hosted on the computer. "Keeping these devices in sync is driving us crazy," Steve told the crowd.

To address the new reality, Apple has moved the digital hub to the cloud. All devices can talk to the cloud whenever they want, with instant propagation to all other devices. With iCloud, users get 5GB of free storage for mail, documents and backups; purchased music, apps and books don't count. 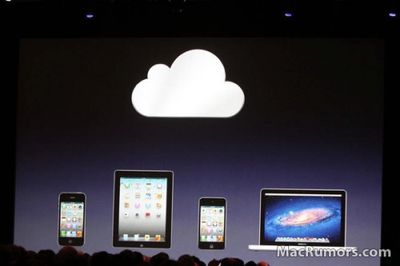 "Some people think a cloud is just a hard disk in the sky," Steve told the crowd. "We think it's way more than that." iCloud stores content (think contacts, calendar, photos, music), with wireless push to all devices. And with APIs providing developers with hooks into iCloud, all apps can take advantage of the service.

iCloud completely replaces MobileMe. Mail, contacts, and calendar are all free. Contacts and calendars will be updated across devices, just like they currently do, but there are several new components to iCloud.

First is the App Store. Users can see purchase history on all devices. Second, iBooks. Books and progress will be synced across devices. Once daily, "a lot of your important content" will be uploaded to the cloud, making it super easy to buy a new iOS device. Just type in your AppleID and password, and all your information will be automatically loaded up: music, apps, books, camera roll, device settings and app data.

Apple has added documents to iCloud as well. Users can edit a document in iWork on a Mac, and it gets instantly pushed to iCloud, where it can be accessed on an iPad. All data is saved and backed up in the cloud. This functionality is built in to Pages, Numbers and Keynote. File transferring seems totally automatic and effortless. Tweak an existing document in Pages on a Mac, and it immediately gets saved to iCloud and changes are immediately pushed to an iPad.

Apple has been working for 10 years to get rid of the file-storage system. It started with iOS, and has made its way to the Mac. iCloud entirely removes the concept of file-storage. Apps manage presentation of its own documents. Apps can store documents in iCloud, documents pushed automatically, with automatic updates on all devices when content is changed anywhere.

For developers, Apple has provided iCloud storage API's, giving easy access to iCloud features for developers -- this is a developer's conference after all, and the dev's love it.

Photo Stream, previewed earlier this year, is part of iCloud too. Photo Stream works just like documents, but your camera roll gets uploaded to the cloud, then sent to everything else. Users can import photos as well, and upload to the cloud. Steve stressed that all these features were built into apps, invisibly, "so there's nothing new to learn." On the Mac, Photo Stream is built in to iPhoto. Apple TV supports Photo Stream as well.

Only the last 1,000 photos are stored in the cloud will be downloaded to iOS devices, but all photos will be stored on the Mac/PC side. Only 30 days of photos are stored on iCloud, so iCloud doesn't save all your data, it just makes sure that everything is synced up properly.

BigDukeSix
I want to find out if there is an 'on/off' swith for photo sharing. I would hate to up or download some adult photos onto my macbook, and then have them show up on my wife's mini/iphone/ipad, since we share the same itunes account. That would not be a good thing....
Score: 6 Votes (Like | Disagree)

How many times do I have to say that MobileMe and iCloud are two different products. Seriously?

If Apple announced a new iPhone tomorrow, and decided to give it away free, you guys would be whining and complaining about having to had paid $200 for your iPhone 4 last week. And i'm sure we would be going through this same discussion, you get what you paid for - just because something new comes out doesn't mean you are entitled to a refund.

Listen - Just because they announce a new service that shall replace MobileMe - doesn't mean I am entitled to a refund. At the time of purchase I knew what I was buying, and I knew I was guaranteed that service for the next year.

iCloud is not MobileMe, and MobileMe is not iCloud. You get what you paid for, "at the time of purchase." That is - Mail, Calendar, Gallery, iDisk, and Find My iPhone. iCloud does not include those services AT THIS TIME. And when released, it will only be an alternative to MobileMe until MobileMe expires. MobileMe users are not required to switch to iCloud!! Therefor, I am not paying for a service that is otherwise free.

That's like comparing MobileMe ($99) with Google Apps (Free). I chose MobileMe, I chose to pay, I chose my service.

Wow, drinking a lot of the Apple cool aid there. You can say it once or 50 times, but it's still not true. MobileMe and iCloud are the same thing, just like dot Mac and iTools were before them. Giving it a new name and a couple cool features doesn't make it a brand new product. At most it's an upgrade.

The proper route would be for Apple to prorate refunds to mobileme subs. If I just re-upped my MM sub a couple months ago, I'll be paying for something for the next 10 months that others get for free with iCloud in the fall.
Score: 5 Votes (Like | Disagree)

3goldens
After reading through 4 pages of repeated posts and questions all I can say is some of you folks should take a big fat chill pill and relax.

did you really think they were going to have the answer or did you just have some extra time on your hands and wanted to jerk some poor operator off?
:confused:
Seriously, it's 3 months off, the memo isn't out yet and you'll get it when it is, until, then, just relax, everything will work itself out.

P.S. Heres a novel idea: Try reading the posts before repeating yet another question already asked and already answered!
Score: 5 Votes (Like | Disagree)

tomatillo
Maybe I'm just too old. I still can't figure out why anybody thinks that "doing away with the file system" and sandboxing data is even remotely a good idea.

When I'm on the computer, I work on projects. A typical project has three or four word processing documents, two or three spreadsheets, some files of lab instrument output, dozens of images, and a thread of email messages. It all needs to be kept together, not spread around randomly in different sandboxes.

I just can't picture a workflow that could possibly accomplish anything in this brave new wurld.
Score: 5 Votes (Like | Disagree)

Robertus
Apple has been working for 10 years to get rid of the file-storage system. It started with iOS, and has made its way to the Mac. iCloud entirely removes the concept of file-storage. Apps manage presentation of its own documents. Apps can store documents in iCloud, documents pushed automatically, with automatic updates on all devices when content is changed anywhere.

Doing away file-storage system from the Mac scares me. I'm not entirely comfortable with the idea of leaving personal information and incomplete data to iCloud from my future Mac system. I wanted to directly access to them from my Mac's HDD (and syncing with iPad or iPhone if I need it) instead of some wireless data-in-the-sky system. Potentially, any hacker can get into iCloud and steal your data.
Score: 5 Votes (Like | Disagree)

Please Apple, iCloud sounds really cool, but please don't screw over the folks who have grown to love all of the features dating back to .Mac.
Score: 5 Votes (Like | Disagree)
Read All Comments