Barron's reports on a new research note from Hudson Square analyst Todd Rethemeier, who claims that the fifth-generation iPhone due this fall will indeed support HSPA+ technology, a development that will allow the device to offer faster data speeds on GSM networks such as AT&T. (The currently shipping iPhone supports standard HSPA.) Despite the fact that HSPA+ is slower than the LTE standard being rolled out by major carriers, AT&T has begun marketing its HSPA+ network as "4G", meaning that the carrier could position the next iPhone as a 4G device despite it failing to offer LTE compatibility. 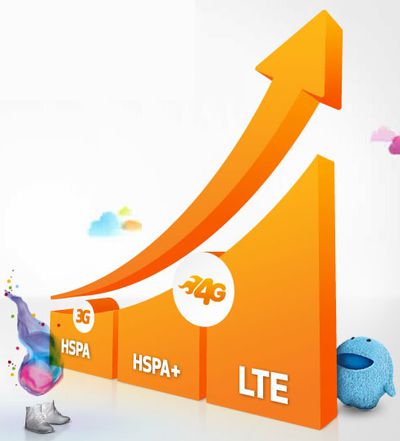 The implications of an HSPA+ iPhone are significant in the United States, where Apple presently offers a separate CDMA iPhone running on Verizon. Even with both current models of the iPhone 4 limited to 3G networks, AT&T's HSPA data network is already faster than Verizon's EVDO data network. That disparity will be magnified with the next iPhone as AT&T users will be able to experience download speeds in the range of 5-10 Mbps under HSPA+ while users on Verizon will remain stuck on the carrier's current 3G network running in the neighborhood of 1 Mbps.

And that advantage would continue to be significant even for the expected LTE-enabled sixth-generation iPhone until LTE networks are essentially built out, as AT&T users would be able to fall back from LTE to HSPA+ while Verizon users would fall all the way back to basic 3G when out of LTE coverage areas.

For AT&T iPhone 5 users, this could mean download speeds of 5-10 Mbps, compared to less than 1 Mbps for a Verizon user. Certainly, when an LTE iPhone is introduced AT&T would lose some of its marketing advantage. However, even when that happens, the phone will be backwards compatible, so the AT&T iPhone 6 would be able to roam onto the HSPA+ network when an LTE network is not available, giving AT&T an advantage in suburban and rural areas for several more years, we believe.

AT&T notes that it is currently seeing "4G" speeds of up to 6 Mbps for HSPA+ devices connected to cell towers utilizing the enhanced backhaul connections needed to support such speeds. The carrier touts HSPA+ as an intermediate step on the way to LTE, a move that will enable it to be the only U.S. carrier to offer two layers of "4G" speeds on its network.

Early reports have seen some users of "4G" HSPA+ devices on AT&T experiencing speeds slower than that seen on 3G, particularly when it comes to upload, although the carrier is still finishing building out its full HSPA+ capabilities. Consequently, it remains to be seen exactly just how wide the disparity would be between an HSPA+ iPhone running on AT&T versus one running on Verizon's network.

Verizon executives have claimed that the next-generation iPhone will be a single "world-mode" model capable of operating on both GSM and CDMA networks. The CDMA iPhone 4 and iPad 2 already include a Qualcomm chip capable of supporting both HSPA+ and CDMA 3G standards, meaning that Apple would primarily have to focus on integrating sufficient antenna capabilities to support the number of frequencies required for both CDMA and GSM compatibility in a single device.

ratzzo
Why do they label anything as 4G nowadays when it clearly isn't? :confused:
Score: 6 Votes (Like | Disagree)

_Refurbished_
Throughout the internet, this includes top rated journalists, people concern themselves with speeds and "speedtests". A maximum theoretical speed is, in a lot of cases, less important than latency.

My average latency on Verizon is 190ms. My WiFi is only 100ms lower than that. My average speeds range from .5mbit > 1.2 mbit and are much more consistent on a day to day basis.

Even though my speeds are better with ATT, my Verizon iPhone reloads sports scores faster, loads mobile sites faster, videos load more evenly and the majority of desktop sites fly by. Verizon's lower latency leads to a better overall experience. 1 mbit is sufficient for the majority of work that needs to be done on a mobile device.

The point I'm trying to make is that HSPA+ tends to have a lower latency than HSPA and that will be the most noticeable change for ATT users, as they transition to the iPhone 5(4s). A lot of tasks on the iPhone are latency related, and not speed related.
Score: 5 Votes (Like | Disagree)

Feds need to step in and set limits to what people can call 4G. This crap is getting confusing.

That and you should not be able to run TV Ads claiming the same when you dont even have 4G anywhere in an entire State. People walk into a store buy a 4G phone and never think to ask if they even have 4G service. They find out later "It's Coming". Total farse and deceiving to the average consumer.

I have several people a week brag to me about their 4G smart device and I smile while telling them good job, we don't even have 4G anywhere in the entire State you moron.
Score: 4 Votes (Like | Disagree)

Why do they label anything as 4G nowadays when it clearly isn't? :confused:


The same thing happens every time there's a race to be the first to adopt a new buzzword.
Score: 4 Votes (Like | Disagree)

FriarNurgle
Feds need to step in and set limits to what people can call 4G. This crap is getting confusing.
Score: 4 Votes (Like | Disagree)

Why do they label anything as 4G nowadays when it clearly isn't? :confused:

well technically it 4G but that is more because the carriers got them to change what is defined as 4G.

I call it Fake G. It pisses me off that they really are doing it. I would not be surprised if at some point LTE becomes known as 5G.