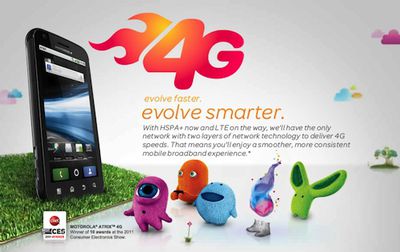 AT&T today announced that it will launch its next-generation LTE 4G wireless network in five U.S. cities "this summer": Dallas, Houston, Chicago, Atlanta, and San Antonio. An additional ten unnamed markets are planned to see LTE roll out in the second half of the year with AT&T aiming to cover 70 million Americans by the end of the year.

AT&T has delivered five mobile broadband speed upgrades in recent years, including our HSPA+ deployment last year. And average nationwide speeds on the AT&T network have increased - more than 40 percent over the past two years alone.

The next network evolution will arrive this summer with the addition of LTE in five markets - Dallas, Houston, Chicago, Atlanta and San Antonio. We plan to add another 10 or more markets in the second half of the year, and cover 70 million Americans with LTE by year-end. We also have plans to add 20 4G devices to our robust device portfolio this year, with some of those being LTE capable.

The announcement indicates that AT&T remains on schedule for its LTE rollout and offers the first word on launch markets for the service.

Many observers had been hoping that Apple might include LTE technology in the next iPhone, particularly given rumors that Apple won't be introducing the handset until several months after its usual annual update window, but increasing numbers of reports are indicating that LTE won't make it into the new iPhone, simply because the chips required by Apple won't be available until late this year. Apple has stated that the current generation of LTE chips requires handset design compromises that the company is not willing to make.


Chicago is the third largest city in the US. How does it "not matter?"
Score: 23 Votes (Like | Disagree)

You do realize that Chicago and Houston are both larger than San Francisco, right? Also, I'm sure those living in the aforementioned cities don't echo your sentiments.
Score: 15 Votes (Like | Disagree)

Testing something new in only major markets first = fail

Come on now. Be serious.


Sounds to me like they've already done the testing. Rollout doesn't mean testing...unless you're Google.
Score: 14 Votes (Like | Disagree)


Testing something new in only major markets first = fail

Come on now. Be serious.
Score: 8 Votes (Like | Disagree)

Before you quote me, answer is on Post #92 and #93 of this same thread.
Score: 6 Votes (Like | Disagree)
Read All Comments

Wednesday May 25, 2022 8:56 am PDT by Hartley Charlton
Leaker Jon Prosser today shared ostensibly accurate renders of the iPhone 14 Pro, providing the most accurate look yet at what the device could look like when it launches later this year. In the latest video on YouTube channel Front Page Tech, Prosser revealed renders of the iPhone 14 Pro made by Apple concept graphic designer Ian Zelbo, highlighting a range of specific design changes...
Read Full Article • 114 comments