There has been a considerable amount of back-and-forth regarding staff meetings and other activities reportedly scheduled for this weekend at Apple's retail stores, with some speculation suggesting that Apple could be readying a product launch or other activities related to the company's 10th anniversary of the opening of its first retail stores.

It is beginning to appear, however, that the events may be a revamp of on-floor sales procedures that could see the company equipping its sales staff with iPads for checkout and on-floor demonstration purposes. We had heard last month that the events were related to internal training rather than a special event or launch, but continued rumors have brought ongoing attention to the possibility of something more.

Yesterday, 9 to 5 Mac reported that it had received hints of the events being related to "Apple Store 2.0", suggesting that the changes would be bringing significant changes to the functioning of the company's retail stores. 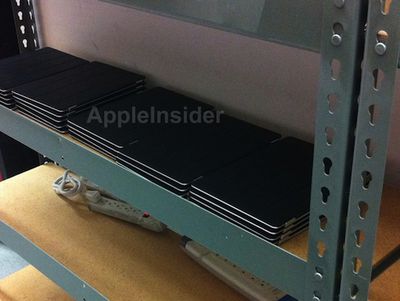 Stocks of iPad 2s waiting for on-floor deployment at Apple retail store
AppleInsider now appears to be filling in the picture with a new report claiming that Apple retail stores have received shipments of dozens of iPads that appear to be destined for on-floor staff usage and are said to be set to be equipped with a new version of the company's "RetailMe" software to support the rollout.

People familiar with Apple's retail operations revealed that stores across the U.S. have been stocked with dozens of iPads that are being prepared for use by employees. Training and utilization of the hardware could begin as soon as this weekend.

In one location, nearly 40 iPads were supplied for a store with about 100 specialists. Based on those numbers, everyone working on any given day could be equipped with an iPad, perhaps in place of an iPod touch-based EasyPay terminal, which Apple stores switched to in 2009.

The new RetailMe software offering product information and training materials for sales staff is said to potentially be the subject of the "gigabytes" of training data previously claimed to be scheduled for download to Apple's stores on Saturday, although that theory has yet to be confirmed.

Update: 9 to 5 Mac has more on the retail revamp, claiming that Apple will be rolling out a number of enhancements to its stores including dedicated "Startup Sessions" areas for personal setup, iPad-based signage and information stations next to display machines, and new visual displays and sound systems. Finally, the company is said to be rolling out a revamped Apple Store application for iOS devices to assist customers with their in-store experience.

A few changes I would suggest
1. Instruct employees how to shave and keep a neat appearance
2. Improve on the 30 to 45 minutes they are running late for appointments.
3. Block Facebook from store computers.

Asking a hipster to shave his beard is like knocking Thor's hammer out of his hand! How dare you!
Score: 5 Votes (Like | Disagree)

I agree 100%. I hate Apple stores, mostly because they are packed with people that have no intention of buying anything. I avoid them at all costs.


Are you suggesting that there is no correlation between the most profitable retail stores in the world, and the fact that they are always packed full of people "not buying anything"?

How else would you explain the fact that any other retailer on the planet would drop their shorts for such a "problem"?
Score: 4 Votes (Like | Disagree)

A few changes I would suggest
1. Instruct employees how to shave and keep a neat appearance
2. Improve on the 30 to 45 minutes they are running late for appointments.
3. Block Facebook from store computers.

joshs2000ss
I wouldn't want to carry an iPad around all day. I know it's not that heavy, but much more cumbersome than the iPod.

Maybe they can carry it "Flava-flav" style? :D
Score: 4 Votes (Like | Disagree)

SixPenceRicher
If this is a sales process retooling, it wouldn't surprise me at all that they would have mandatory meetings to get everyone up to speed on the new process. Apple's retail stores are the most profitable retail stores on the planet (based on floor space), and anything that Apple does to improve the retail sales process should be considered a competitive advantage. For instance, if this retooling results in better sales flow, thus increased revenue, it will make for even better margins (where Apple's competitors still can't find their ass with both hands).

Also, consider the new iCloud service. What better way to up-sell customers than to have an online review of benefits, quick demos, and other "salesy" stuff when the customer is checking out -- and to have all of it well-presented (polished, attractive, good flow) during the sales process. It makes a difference, and would be a welcome and effective way to drive new service sales.
Score: 3 Votes (Like | Disagree)
Read All Comments