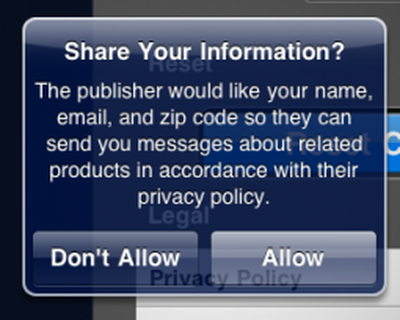 Last week, Forbes writer Jeff Bercovici asked what was it that changed that prompted Hearst and Conde Nast to suddenly agree to Apple's terms for iPad magazine subscriptions. The answer turned out to be surprisingly simple. Publishers had previously argued that the lack of subscriber information from iPad subscriptions was even a bigger hurdle than the 30% revenue share. Instead of automatically sharing the data, Apple asks individual subscribers to opt in. As it turns out, up to 50% of users agree.

Initially, publishers were worried, reasonably enough, that users would overwhelmingly say no. But they don't. In fact, about 50 percent opt in.

Apple's Eddy Cue confirmed the figure according to Bercovici. The author credits the trust in the App Store as the reason for the high opt-in rate.

Dr McKay
At least it tells you it wants to, and gives you the option to say "No".

Nothing sinister, it's being open and honest.
Score: 5 Votes (Like | Disagree)

I think it's good being given the option. Certain products I like or trust, and don't mind providing my info for more communications.
Score: 4 Votes (Like | Disagree)

Only Grade-A suckers do something for free. If they want my demographic data, then I want something in return (e.g. 20% off). It's business, don't ask for something of value and not offer something in return. Same thing with paperless billing, The only time I have agreed in the past was when I received a credit or gift certificate in return.


You know, thinking about your statement, Apple really deserves kudos. They have 100's of million names and info and yet, do nothing with it to my knowledge. Obviously they do have some opt in things, but buying a Mac or having an iTunes account dosent translate into junk mail.

It will be interesting to see how Google does overtime since all their free OS's are supported by ad sales.
Score: 2 Votes (Like | Disagree)

Why would anyone give them this info - you are just lining the pubs pockets when they sell your info to others.


You hate everything don't you?

Like it or not advertising pays for most of our entertainment. Everything from sports to TV to movies. What's the big deal? Ignore what you don't like and pay attention to what you want.

Personally I don't care. Send me all the crap you want. Some of it I may actually care about. No harm, no foul.

I wish people here would grow up about companies trying to make money. It's what companies do. But just because they do something that makes them money does not make them evil. Geech. :rolleyes:
Score: 2 Votes (Like | Disagree)

Magazine publishers made most of their money by selling their subscribers' demographic data to ad agencies. Back in the day when people actually subscribed to physical magazines. If enough suckers, er, subscribers say "yes" then maybe there's hope for old school publishers after all.
Score: 2 Votes (Like | Disagree)

kurzz
Yes, I click allow because I'd love to receive advertising and countless hard to unsubscribe emails from companies I've never heard of because they've sold my name, email and address. ;)

At least I get free paper ads in the mail that I can use for the pet cage.
Score: 2 Votes (Like | Disagree)
Read All Comments