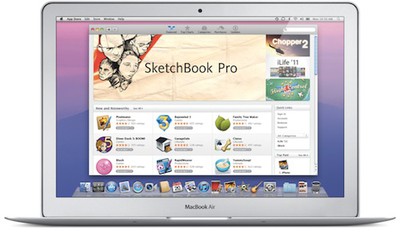 AppleInsider reports that it has learned that Apple is planning to utilize the Mac App Store as the "preferred" mechanism for distribution of Mac OS X Lion when it is released to the public later this year.

The Mac App Store, available to all users running the most recent version of Mac OS X 10.6 Snow Leopard, will become the de facto method for obtaining the Lion upgrade, people familiar with the matter have revealed. Users will be able to upgrade instantly without the need for physical media by purchasing Lion through the Mac App Store.

Apple is said to presumably be planning to also release Mac OS X Lion on physical media to support users who are running older Mac OS X versions incompatible with the Mac App Store or who have slow Internet connections that would make downloading the large update unwieldy.

Options for physical media distribution could include the traditional optical disc or even USB keys such as those that ship with the MacBook Air for providing system software. The lack of an optical drive on the popular new MacBook Air provides an opportunity for Apple to push alternative distribution methods such as direct download or USB keys, although the MacBook Air is also capable of wirelessly using optical drives on nearby Macs and PCs for software installation.

diamond.g
I wish Apple would sell the USB key + Lion. I think their Key is nifty...
Score: 8 Votes (Like | Disagree)

easy4lif
i intend to get mine on a disc rather then a download.
Score: 6 Votes (Like | Disagree)

If you're posting on Macrumors you have enough bandwidth to get it, just may have to wait a few minutes.


Thanks for alerting me to this. I had no idea that Macrumors took up GBs of my bandwidth cap. :p
Score: 5 Votes (Like | Disagree)


Does that work if the hard drive tanks and fumbles, crashes, burns, and is a useless pile of crap?
Score: 4 Votes (Like | Disagree)


Putting it on the Mac App Store raises an interesting issue about licencing - they said that purchases could be used on any Mac that you use.

That opens them up to a lot of abuse.

The current method is "the OS DVD you buy can be used anywhere, as often as you like, forever."

How could it be worse than that?
Score: 4 Votes (Like | Disagree)

OK, not really, just wary of not having an OS disk in case of problems. It'd have to be followed by the merest physical back-up device in the mail, just in case. The current packaging of OSX is ridiculous; it might be good for the noobs, but I throw away everything but the disk the moment the box opens. I'd rather get a tiny USB key in a plain, brown rapper.
Score: 4 Votes (Like | Disagree)
Read All Comments