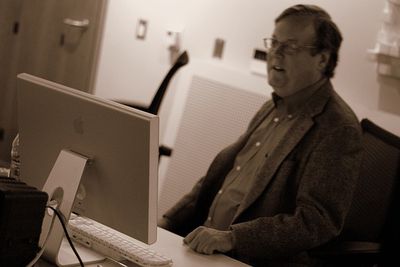 Tomlinson Holman working at a Mac in 2007 (Source: Flickr)
As noted by GigaOM, tech pundit Leo Laporte today tweeted that he has heard "on good authority" that Apple has hired audio pioneer Tomlinson Holman to head up the company's audio projects.

Apple has reportedly hired Tomlinson Holman as its new audio chief, according to a tweet by Leo Laporte Wednesday morning. Laporte said he had it "on good authority" that Holman "is joining Apple to run audio." Holman is the brain behind Lucasfilm's THX sound, and the world's first 10.2 surround sound system. Apple had yet to respond to a request for confirmation as of this writing.

Holman spent fifteen years at Lucasfilm, working to develop the THX sound system and related technologies. He has been serving as professor in the School of Cinematic Arts at the University of Southern California while also pursuing development of advanced surround-sound technologies such as "10.2" for increased spatial sound perception through his own company. The technology focuses on creating a heightened level of immersion by utilizing an array of seven front speaker channels, including a pair of "height" channels installed at a 45-degree angle above the listening area.

Holman received an Academy Award for Technical Achievement in 2001 for his contributions to the development of cinema sound systems.

It'd be great if Apple finally added some kind of proper support into the Mac OS/Quicktime for 5.1 audio over the optical audio port. Perian is a bit of a kludge, half the time I just get static through my Logitech z5500, or the sound channels get all mixed up. They'd need to licence either a Dolby Digital or DTS encoder to send discreet multi-channel audio (such as from games or some movies with an audio track for each channel) over the S/PDIF port. Some Blu-Ray movies include a pre-encoded DTS or Dolby Digital track, which can be sent over S/PDIF as raw digital data. As I said, it often won't work though.

It'd also be pretty cool if Apple did have some sort of quasi-surround sound built into their Macs, as they used to have SRS back in OS 9. Sometimes it can work quite well, especially if the algorithm is fed 6 separate channels. Generally Apple seems to use pretty decent quality speakers, the ones in my 27" Apple display are pretty impressive, as are the ones in my 15" MPB. They're loud, and for built-in speakers, pretty basey. Though they do have a tendency to make things sound like you're listening through a drain pipe.
Score: 2 Votes (Like | Disagree)

Most people are not audiophiles. Yes, they listen to things, but they are not finely attuned to the quality of sound. Many audiophiles don't even realize they aren't really. However, being so progressive and perfectionist with sound shows how brilliant Apple is as a company. Does Dell, MS, or other computer companies give a ****? No. They crank out rubbish more often than not.


Are you really stating that Apple is brilliant for working on audiophile sound quality while simultaneously saying that no one cares?

Apple has long been behind the curve on SQ. It's funny you should mention MS. The Zune is felt to have much better SQ than the iPod.
Score: 1 Votes (Like | Disagree)

Are you sure about that? Just tested on my 2009 Mac Pro and it didn't work.

5.1 in my car sounds amazing as it is

I hope you're joking, or you only watch movies in your car. Because 5.1 music is few and far between, and 2.0 sounds terrible coming out of 5.1
Score: 1 Votes (Like | Disagree)

It'd be nice to give their macbook/pros and iMacs higher quality speakers.

Yes, I hear they have hired this world-renowned expert with the prime objective of using his immense skills to get improved quality from the one-dollar built-in speakers in our MacBook Pros.
Score: 1 Votes (Like | Disagree)

tdmac
I am thinking this has nothing to do with Surround Sound etc. My guess is that he will be working on ways to get better audio quality out of Apple's compressed format both audio and video.
Score: 1 Votes (Like | Disagree)
Read All Comments