Apple has seeded a new update to Mac OS X Lion to developers. The new version is build 11A444d. No word yet on any new features that are found in the latest release. The update can be found in Mac OS X Lion's Software Update control pane.

Apple will be launching Mac OS X Lion to customers this summer. We will likely hear more details about it during this year's WWDC held in June. Apple's website gives an overview of several of the publicly announced features coming to Mac OS X Lion.

The macbook air's ship with 2gig standard. They wont leave a computer that new behind.


They won't make Lion "uninstallable" on it. But it might be "unbearable" for all but the most casual of users. ;)

On a side note, I've noticed there's now a "Show downloads" button to the left of the Search Field: 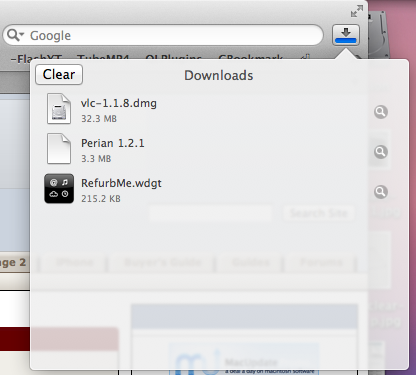 NebulaClash
These naysayers have been moaning and groaning about iOS forever. They will continue to do so forever. In the meantime the rest of the world will get on with using some great software (many of it free) and getting a lot of things done.

I'm glad Apple is pushing things forward. The last thing I want to see is OS X stagnate. Since we are now in the post-PC era, ideas from iOS are precisely what need to be explored. It won't be too many more years from now when the majority of consumer-level computing devices will be tablets running iOS-type gestures. It will be the expected thing to be able to support finger gestures to do common tasks. Any OS that cannot handle this will be considered old-fashioned.

Apple is doing the right thing by getting the future into OS X. They don't want to be left behind.
Rating: 3 Votes

And people kept telling me that OSX and iOS weren't going to merge in any meaningful manner for years ahead, if ever. Yeah right. I'd bet the one after this has them nearly fully merged and I mean towards iOS for the most part. OSX will be dumbed down to the lowest common brain cell and you won't be able to get free/open software anymore. It'll have to come through the App Store or not at all. Wait and see. That is the point I'll be moving on.

WTF is so great about 'gestures'? There's nothing quite so miserable as barely bumping the fraking trackpad while typing and causing the text cursor to go flying off somewhere else or any other way of accidentally activating some of these gestures (the more you have the more likely you'll accidentally activate them at some point unintentionally). And while Apple trackpads feel better than many out there, nothing beats a mouse for certain operations, IMO. I'd take a mouse any day over a trackpad. Old fashioned? That's like saying a '65 Mustang with a 4-speed on the floor is old fashioned next to a modern Mitsubishi Lancer with paddle shifters. I'll take the Mustang ANY DAY over that.


Definitely disagree with you. I have my trackpad configured with loads of shortcuts, and I feel really limited with a normal Windows 2 button mouse.

Apart from the generic OS X defaults, I close, open, and refresh tabs, open links in new tabs, and switch to previous/next tabs, all without moving the cursor one inch.

For example, just a quick flick with 4 fingers in one direction or the other switches to the corresponding tab. Much faster then going up to the tab bar.

On my Magic Mouse, I have similar shortcuts.

This makes working on my Mac (and specially Safari) much faster, easier, and more efficient.
Rating: 2 Votes


I don't understand why people are panicking about the iPad thing. The iPad has some nice features people enjoyed so they are bringing it to the desktop. Its not like you have to USE those features but if it makes computing more enjoyable why not use it?

It'll be nice for those of us who do real work on our computers all day long to have some of these conveniences. For some reason though whenever Apple simplifies something people start crying "Apple doesn't care about the pro users anymore!" (Even though in reality of the person were truly a "pro user" they would welcome anything that helps them get their job done more efficiently).
Rating: 2 Votes

What stage will this be stable enough to use as your main OS? :apple:


When it is publicly released.
Rating: 2 Votes

Everything and I mean *everything* is constantly being shared from these developer's builds. Check youtube. It is what it is. There are no killer features in iLion. Certainly nothing like going from Tiger to Leopard.


Don't kid yourself. Lion's list of new features is much longer than Leopard's.

And people kept telling me that OSX and iOS weren't going to merge in any meaningful manner for years ahead, if ever. Yeah right. I'd bet the one after this has them nearly fully merged and I mean towards iOS for the most part. OSX will be dumbed down to the lowest common brain cell and you won't be able to get free/open software anymore. It'll have to come through the App Store or not at all. Wait and see. That is the point I'll be moving on.

There's a huge difference between merging in concepts of the UI, user-friendly software distribution, media access and what you describe.

It is very unlikely that Apple's engineering and marketing would destroy what they've worked to build for so long, IMHO. How are you so certain that they'll be bringing all the bad stuff along with the good stuff? Seriously - do you really think that Apple's talent are as utterly foolish that you make them out to be?

Is there? They're already controlling what can and cannot be sold on the iOS platform (and it is an entire platform now with full-fledged computers in the form of the iPad). They've proven themselves beyond contempt by insisting that in-app subscriptions be the same or lower on the App store than direct, despite the fact that they demand 1/3 of all the selling price. They've added an 'App' store for OSX proper and have the same 30% "grab" for everything on there. They're advertising and bragging about bringing iOS features back to OSX. I'm just doing simple math here. You can make 1+1 = 1 if you say it's a bigger one, but in my world, 2 is still the more likely answer.

And you are the ones using the words "foolish". I think it's quite possibly a business-savvy solution to ensuring profits stay high into the future. What you or I may want in OSX is irrelevant to both Apple and Steve Jobs. Steve has essentially said that consumers don't know what's best for them and that it takes a visionary to move forward. We know Steve's 'vision' is smaller/thinner/more mobile at almost any cost. So I'm not saying it will happen like that, but that it's looking more likely every day. Only time will tell for sure. But I know if it does happen, I'll no longer have an interest in OSX. I don't want Apple deciding for me what I can or cannot buy or watching developers get 1/3 their gross taken from them (same % as a typical injury lawyer BTW. You don't get paid until they get paid FIRST and your bills 2nd and you last; in this case it would be taxes instead of bills). You can think it's good/fair/right. I don't agree and I don't want Apple telling me I have to use Safari because they don't want Firefox or Chrome competing with them.

No, it'll happen whether we like it or not. Because the industry is going to the iPad like dumbed down devices for every day use, and in 10-15 years those devices will be fast enough for all of us to do almost everything on them.


I don't know about that. There will always be a market for faster/more powerful (i.e. most people may drive a Ford Focus or Chevy Impala or Toyota Corrola and hybrids may capture larger and larger market penetration in the future, but that doesn't mean there isn't a market for the WRX, Mustang, Corvette, etc. even if it shrinks over time) and so even if Apple AND Microsoft bail out of traditional computing, that just means someone else will likely take over. They can't make Linux go away, for example. And if people didn't BUY it, the lines would stop. Newton didn't exactly go over so well the first time around....
Rating: 1 Votes