Earlier this year, we pointed to a report from media research firm Nielsen indicating that Apple's iOS was just barely holding off Android in smartphone usage in the United States. But continued strong growth from Android that saw the platform easily leading the pack among the most recent smartphone acquirers left little doubt that Android would quickly pass iOS in total penetration. 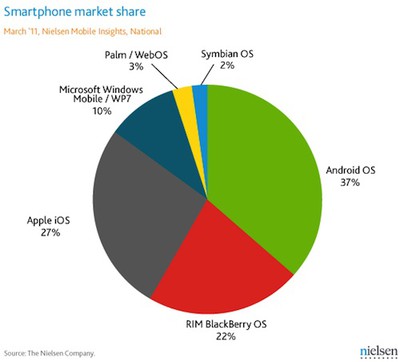 New Nielsen data from March but released today shows just that, with Android now taking the overall lead with 37% of the market in the U.S., ahead of iOS which continues to hold steady at 27%. Research in Motion's BlackBerry platform has continued its slide and is now down to 22%.

Just looking at those who acquired smartphones in the six months leading up to the March survey, Android's lead is even stronger with a full 50% of users opting for the platform. Apple polled in second place at 25% while Research in Motion dropped to 15%.

Nielsen also took a look at future buying plans, assessing those consumers planning to purchase a smartphone sometime within the following year from the date of the survey. According to the latest data, Android now edges out iOS, 31% to 30%, a significant change from the July-September 2010 period when iOS held a 33%-26% lead over Android among future smartphone purchasers.
[ 568 comments ]

Macman1993
Some will be bothered about IOS not being the most dominant. I personally don't care, I just want the best mobile OS.
Score: 17 Votes (Like | Disagree)

brendu
One interesting thing to note. Apple held 25% of recent acquirers with 2 phone models. The iPhone 4 and iPhone 3GS. They are also on only 2 carriers, and have only been with Verizon for part of the time leading up to the march survey. Android however is on dozens of handsets and all four US carriers. I would say apple is doing amazingly well when you consider those specifics.

I am not worried about iOS not having a larger chunk of the market, I am blown away that it has 25%.
Score: 16 Votes (Like | Disagree)

THAT'S WHAT SHE SAID.

Eddyisgreat
If the iPhone were buy one get two free as well then I bet those numbers would be different :D
Score: 11 Votes (Like | Disagree)

Competition is good :) Keeps Apple on their toes

Wednesday June 23, 2021 5:07 am PDT by Sami Fathi
Apple earlier today published a detailed report outlining in blatant terms the negative impact that sideloading would have on the iPhone and iPad, specifically calling out the impacts it would have on user privacy and security. Now, the company is continuing its PR push, with an executive noting in an interview that users who wish to sideload apps already have that option thanks to other...
Read Full Article • 399 comments