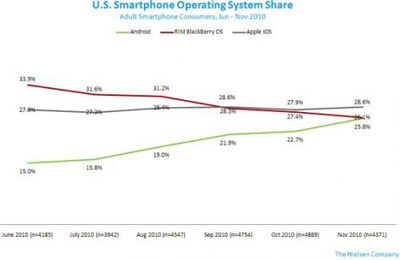 Last month, we pointed to research from media firm Nielsen indicating that Apple's iPhone had finally surpassed Research in Motion's BlackBerry operating system in smartphone market share in the United States in October. In a follow-up post yesterday, Nielsen released numbers for November indicating that Apple has widened its lead over Research in Motion, which is now in danger of falling behind Google's Android operating system.

It has been a remarkable turnaround over the past six months, with Apple's share of new smartphone purchases in the U.S. holding relatively steady in the ~26% range for purchases over each preceding six-month period while Android has surged to over 40% and Research in Motion has fallen to under 20%. As recently as July, all three operating systems had been tightly clustered in the 25-28% range.

In another look at market share among the various smartphone platforms, Net Applications has released its browser usage numbers for December 2010, which examine worldwide browser usage and incorporate all iOS devices instead of just the iPhone as limited by smartphone studies.

In its study, Net Applications finds that iOS usage surged across the board between November and December as new customers came on board in the holiday season, with iOS usage share growing 24.3% month-to-month to claim 1.69% of total Internet browser usage. The iPad led Apple's charge with 33.3% share growth, with the iPod claiming 25% growth and the iPhone 20% growth. While Android experienced a slightly higher rate of share growth of 29%, its overall share of 0.40% remained far behind that of iOS, illustrating the impact of Apple's broader iOS ecosystem that extends well beyond smartphones.
[ 175 comments ]