While much has been made of Android's rapid gains in the smartphone market that has seen it surge past the iPhone, a perhaps equally vocal contingent has pointed out that iOS is much larger than just the iPhone and that Android has only just started pushing into the tablet market and has yet to forge an effort into the non-phone touch device market.

But yesterday, comScore finally put some numbers behind that latter argument, building off its earlier report regarding February data on smartphone usage to reveal that the overall iOS platform of iPhone, iPad, and iPod touch reaches 37.9 million users in the U.S., 59% greater than the reach of Android.

Initial research indicates that Apple's iOS platform, which resides on iPhones, iPads and iPod Touches, has a combined platform reach of 37.9 million among all mobile phones, tablets and other such connected media devices, outreaching the Android platform by 59 percent.

Rather than simply counting device sales, comScore's data tracks individual users, making that 37.9 million number reflective of users (some of whom have more than one iOS device) rather than devices directly.

As a result, Apple's iOS reaches 16.2% of the 234 million mobile platform users in the United States, with Android registering at 10.2% with 23.8 million users.

But perhaps most notably, comScore finds that there is not a tremendous amount of overlap in users, with only 10.5% of iOS users accessing the system from multiple devices such as an iPhone and iPad or iPhone and iPod touch.

"These data clearly illustrate the Apple ecosystem extends far beyond the iPhone," added [comScore senior vice president of mobile Mark] Donovan. "Though it's frequently assumed that the Apple user base is composed of dedicated Apple 'fanboys', there's not a tremendous amount of overlapping mobile device access among these users. This of course has significant implications for the developer community as they consider the market potential in developing applications for different mobile platforms." 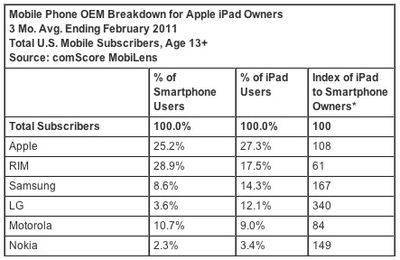 The survey also shows a broad appeal for the iPad, moving well beyond existing iPhone users to appeal to users of smartphones from a number of other companies. In particular, LG, Samsung, and Nokia smartphone users are overrepresented when it comes to iPad ownership, while users of Research in Motion and Motorola smartphones are somewhat underrepresented in iPad ownership. According to the survey, only 27.3% of iPad owners are also iPhone owners, while 17.5% are BlackBerry owners, 14.3% are Samsung owners, and 12.1% are LG owners.
Related Roundup: iPad
Tag: ComScore
Buyer's Guide: iPad (Neutral)
Related Forums: iPod touch and iPod, iPhone, iPad
[ 108 comments ]

Except iOS is not a exclusively a smartphone OS. Again, if you are a developer, the metric that matters is how many devices are using the particular platform.

You can't have it both ways. You can't compare one phone (the iPhone) against every phone out that runs Android. You either have to do a one-to-one comparison of manufacturer to manufacture (that gives you revenue/number of handsets sold/profitability /market share, etc... Android has no revenue, only the manufacturers). Or you have to compare platforms, which includes all iOS devices and all Android devices capable of running apps such as PMPs, tablets and phones. Here, you can look at how much Google makes from ads generated by users of Android phones which, i think is a more valuable and telling metric. And one that would benefit the Android argument.

But the main point is: DEVELOPERS JUST DON"T CARE ABOUT iPHONE VS. ANDROID, or iPhone vs. HTC, or iPhone vs. anything. All they care about is how many people will have access to their app. THEY ARE THE ONES THAT COUNT! Not you, fandroids, or Apple lovers.

Really, it's kind of a pointless article. The majority of people arguing over this do not develop apps. I'm sure there are some devs who do, but their time would be far better spent making sure their apps are available for both devices.

Versus IOS devices that can run 100% of the apps?

I'd like to see your numbers as well, as honeycomb is supposed to be where it's headed, and last I checked, there weren't record numbers of developers flocking to that iteration of the OS.


That isn't entirely true. iPhone 1,1 (and soon iPhone 1,2) users can't run all apps. Anything that requires 4.0 (probably 4.3~5.0 for iPhone 1,2) won't run. Neither will things that require a certain amount of horsepower (say like Infinity Blade).
Score: 1 Votes (Like | Disagree)


all of them.
Score: 0 Votes (Like | Disagree)
Read All Comments