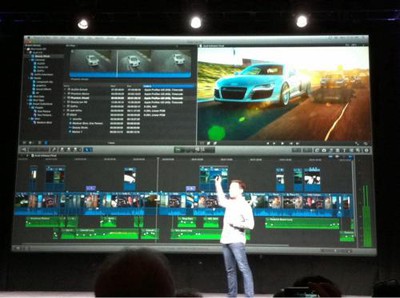 For a detailed list of new changes see our keynote coverage or see PhotographyBay for their play-by-play.

Video by @robimbs
Final Cut Pro X will be a 64-bit application with Grand Central Dispatch support, allowing it to scale and use all available cores for background rendering. Comments from those who watched the demos indicated that background rendering was a big feature (no more waiting) and lots of real time effects and high performance. Final Cut Pro X will be available for $299 on the App Store in June. There was no mention of Final Cut Express or the rest of the Final Cut Studio.

Update: An Apple rep told LoopInsight to stay tuned for news on the rest of the suite:

Loop Insight also managed to get a few screenshots.

lifeinhd
This is what iMovie after iMovie '06 should have been, if only because it has a PROPER FRICKIN' TIMELINE!

CoryTV
They should have just called this iMovie pro, because that's what it is. So, Apple Color is left to die the death of Shake, huh? Wow, crazy. I bet Avid is pretty thrilled with this. It's almost like they said "Let's leave the big installs to Avid"
Score: 1 Votes (Like | Disagree)

Full of Win
So this is basically a jazzed up Final Cut Express and the pros have been shown the door. Why am I not shocked about this. :mad:

Someday I'll tell my kids that Apple was the company for pros to which they will laugh in disbelief; kind of how I do now when old people tell me that American cars were once high quality.
Score: 0 Votes (Like | Disagree)
Read All Comments

Monday July 13, 2020 4:22 am PDT by Tim Hardwick
MySmartPrice has spotted certifications for three new Apple batteries that it believes could be for the upcoming iPhone 12 lineup, despite them being less capacitive than the batteries in the current iPhone 11 series. The batteries are identified with the model numbers A2471, A2431, and A2466, and appear on Safety Korea, China's 3C, and the Danish agency UL Demko. Apple is expected to...
Read Full Article • 126 comments

Friday July 10, 2020 2:58 am PDT by Tim Hardwick
At last month's WWDC, Apple officially announced that its Mac computers will be transitioned from Intel x86 to homegrown Apple Silicon chips. Apple said it plans to deliver the first Apple Silicon Mac by the end of the year and complete the transition in about two years. According to Apple analyst Ming-Chi Kuo, a 13.3-inch MacBook Pro with a form factor similar to the current 13.3-inch...
Read Full Article • 195 comments

Sunday July 12, 2020 1:56 pm PDT by Hartley Charlton
Google will address long-standing battery life issues, particularly on Mac devices, reports The Wall Street Journal. Chrome will improve "tab throttling" by better prioritizing active tabs and limiting resource drain from tabs open in the background. This is said to have a "dramatic impact on battery and performance." Google has reportedly been performing early tests on Mac laptops in...
Read Full Article • 130 comments

Monday July 13, 2020 9:31 am PDT by Juli Clover
Apple today shared a funny video focused on the problems that people working from home have to deal with, including noisy children, chaotic schedules, communication issues, and more. The video focuses on showing off Apple products and their capabilities that can be useful when working from home, such as the ability to scan a document with an iPhone, mark up a PDF, Siri Reminders, and more.The...
Read Full Article • 77 comments