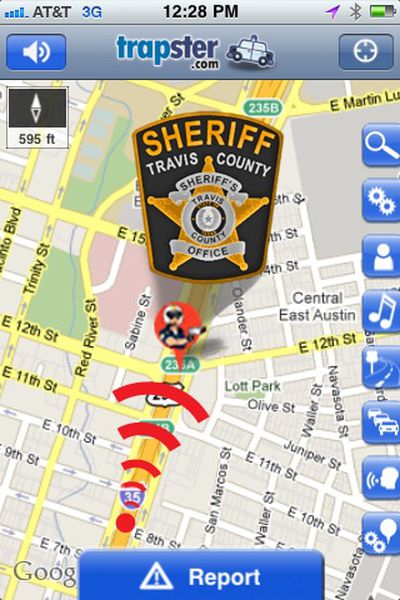 CNET reports that four U.S. senators have sent a letter to Apple's iPhone software head, Scott Forstall, asking the company to remove from the App Store applications that are designed to allow users to be alerted to checkpoints for sobriety testing.

U.S. Senators Harry Reid (D-Nev.), Charles E. Schumer (D-N.Y.), Frank Lautenberg (D-N.J.), and Tom Udall (D-N.M.) are named as senders in the letter, which is addressed to Apple's senior vice president of iPhone software, Scott Forstall. No specific applications are named, but the letter highlights apps that "contain a database of DUI [driving under the influence] checkpoints updated in real-time" as well as one that sends out real-time alerts about the existence of these checkpoints.

"With more than 10,000 Americans dying in drunk-driving crashes every year, providing access to iPhone and iPad applications that alert users to DUI checkpoints is harmful to public safety," the group wrote. "We know that your company shares our desire to end the scourge of drunk driving and we therefore would ask you to remove these applications from your store."

While the letter itself does not specifically reference any iOS applications, a press release from Senator Schumer names Trapster and PhantomALERT as examples of free apps offering location information on such checkpoints.

In addition to real-time information on DUI checkpoints, many of the apps in question also offer information on speed traps, red light and speed cameras, accidents, and other traffic conditions, several of which have also been considered controversial, but the senators' letter focuses specifically on the DUI checkpoint functionality.

The seemingly only purpose of this app is to avoid the checkpoints could be dangerous to those of us who don't drink and drive. They should pull any app.


And who are you, you little Nazi, to determine which applicationi should stay up and which one should be taken down!
People like you just amaze me! You should become a congressman, you'll fit right in with the bunch of 500!

The government tells Apple what they can and can't do all the time. That's why Jobs gets deposed, the FCC regulate their cell phones and Apple can't knock down your house to build an Apple Store on top of it or irradiate small Chinese kids to make the products for it.

If it was just 150,000 regular people asking Apple to take it down (MADD for example) would you have a problem with it?


Actually, you've got that upside-down, buddy! Apple CAN build an Apple Store in place of your house EXACTLY because of government. Have you heard of "imminent domain"? It's a creation of government, not the free market or Apple.
Score: 2 Votes (Like | Disagree)

Let me see... wars in Iraq, Afghanistan, Libya... high unemployment in the USA. Cost of energy is killing the average guy in the pocketbook. I know... lets spend our time getting those terrible DUI apps out of the app store... that way we can tell our Constituents what a great job we are doing representing them in Washington.

Don't forget to vote (them out).


^ Agreed. While this is a gray area indeed, these politicians really have much bigger fish to fry.
Score: 2 Votes (Like | Disagree)

Aniday
Restriction of the freedom perfectly legal information on the internet is always a bad idea. Who knows what they'd ask to be pulled next.

I never understood why we let old men who know nothing about technology or the internet make up laws that govern it.

Merely trying to get rid of the apps wont solve anything and its naive to think it will.
Score: 2 Votes (Like | Disagree)

kdarling
This is why it's a really bad idea to set yourself up as an application gatekeeper.

And who watches the gatekeeper? Yep, politicians and special interest groups looking for easy publicity.
Score: 2 Votes (Like | Disagree)

guerro
I am not sure about other states, but in CA, Law Enforcement is specifically required to announce DUI checkpoints and provide an alternative route. Asking to have these applications removed from app stores contradicts the law regarding DUI checkpoints. Gotta love Politicians. Write a law then contradict it. Awesome.
Score: 2 Votes (Like | Disagree)

Macinthetosh
Most checkpoints have a warning well in advance. The government is just pointlessly overstepping its boundaries.
Score: 1 Votes (Like | Disagree)
Read All Comments