The Register reports that performance of web apps saved to the home screen on iOS devices running iOS 4.3 is significantly crippled compared to those loaded directly through the Safari browser for iOS, although it is unclear if the issue is caused by bugs or a conscious move by Apple to favor App Store apps over web app experiences.

If a web app is run from the iOS 4.3 home screen - in other words, if it is saved to the screen alongside local apps downloaded from the Apple App Store - it runs roughly two to two and a half times slower than it does in the browser, according to various tests. It appears that whereas Apple has updated the iOS 4.3 Safari browser with its high-speed Nitro JavaScript engine, Nitro is not used when web apps are launched from the home screen.

"Essentially, there are two different JavaScript engines," says Alex Kessinger, a mobile application developer and blogger who has focused on building web-standards-based apps for the iPhone. "They're not using the new JavaScript engine with applications that launch from the home screen."

In addition, web apps saved to the home screen are unable to take advantage of HTML5 web caching capabilities, preventing them from running while offline. 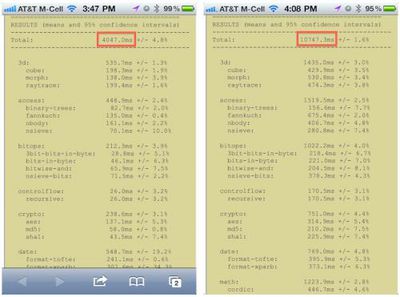 The report notes that developers have filed multiple bug reports with Apple regarding the issues, with Apple apparently aware of at least some of the limitations currently being experienced with web apps saved to the home screen. Apple has reportedly acknowledged, however, that at least some of the issues, including ones related to the use of lower-quality synchronous mode rendering for home screen web apps as opposed to asynchronous mode used for content loaded directly in Safari, are not scheduled to be addressed by the company.