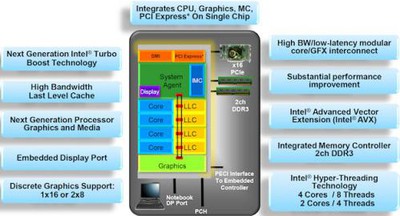 Intel is planning on shipping the Dual-Core Sandy Bridge chips for laptops starting on February 20th, 2011.

The Dual-Core chips are likely upgrades for the existing MacBook Pro line which is due for updates. The Sandy-Bridge CPUs were described as the next generation replacement CPU with significantly improved integrated graphics performance and better performance/power ratios.

The remaining question is how the "design flaw" found in some of the early Sandy Bridge controllers will ultimately affect the production and availability of these new chips. The issue didn't directly affect the CPUs, but affected SATA-II connectors found on the chipsets. Like other computer manufacturers, Apple uses Intel's chipsets to interconnect their CPUs to the rest of the computer. Intel has announced that they would begin shipping fixed chipsets by mid-February.

Thursday May 13, 2021 10:32 pm PDT by Sami Fathi
A new rumor suggests that Apple will announce the third-generation AirPods and the recently rumored HiFi, or high-fidelity Apple Music tier, on Tuesday, May 18, via a press release on its website. The new rumor comes from Apple YouTuber Luke Miani who shared the alleged exclusive news with the AppleTrack website. According to the YouTuber, Apple plans to release the next-generation AirPods...
Read Full Article • 172 comments

Friday May 14, 2021 11:52 am PDT by Juli Clover
Following the discontinuation of the iMac Pro, Apple also appears to be discontinuing Space Gray "Magic" accessories that it sold separately alongside the iMac Pro. The iMac Pro was the only Space Gray Mac, and Apple designed special matching accessories for it. The Space Gray Magic Mouse 2, Magic Keyboard, and Magic Trackpad all now say "While supplies last" in small wording at the bottom...
Read Full Article • 296 comments

Saturday May 15, 2021 11:08 am PDT by Juli Clover
Twitter has been working on some kind of subscription service since last summer, and Jane Manchun Wong, who often digs into new features coming in apps, has shared details on just what Twitter is exploring. Twitter's subscription service could be called Twitter Blue, and at the current time, it's priced at $2.99 per month. There will be a "Collections" section that allows users to save and...
Read Full Article • 75 comments