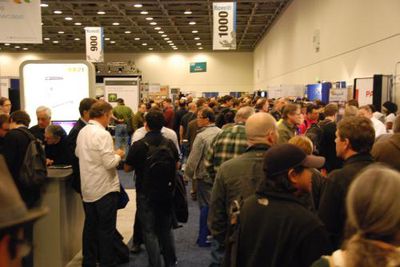 Macworld Expo 2011 kicked off this week with the floor show opening today. This is the second year that Macworld expo has gone on after Apple's withdrawal in 2009. Last year's show was considered a success and early reports claim that this year's show claim higher early numbers in both floor space and pre-registration. Unlike CES and WWDC, Macworld Expo remains open to the general public so much of the foot traffic comes from interested Apple consumers.

The show seemed busy and crowded on the first day, and there were many well known products but also a few new ones.

A brand new product introduced was The Fusion Phone, which promises to be a combination landline dock, speaker and charger for your iPhone. It also provides a traditional dock connector for recharging and a passthrough USB connector so you can sync with your computer.

Beyond the usual dock features, it also offers a bluetooth connection so you can play music or take phone calls through the traditional handset. The Fusion Phone will begin shipping in April, and pre-orders are being taken now for $149.

Navigon, the makers of the popular turn-by-turn navigation app for the iPhone and iPad, announced the release of a car windshield mount accessory with car charging cable. The $49.99 accessory was promoted as a "barely there" design to showcase the iPhone itself.

The company was also promoting its Navigon 1.7 release which came in December. The latest version of the turn-by-turn software offers a single Universal app that supports both iPhone and iPad. Navigon takes advantage of the larger iPad screen to make it easier to plan routes, and those routes can also be sent by email to your iPhone version. So pre-planning can take place on the iPad, even if you don't want to have to bring it with you in the car. Other new features included Zagat content and Google reviews for restaurant ratings, active lane assistance, retina display support and a way to send back map errors to their map provider.

Splashtop was showing off their remote desktop app for iPhone and iPad. The $1.99 apps allow you to remotely control your Mac OS X installation over Wi-Fi or 3G. It does require a client to be installed on your Mac for it to work, but also has full support for sound and claims higher performance than traditional remote desktop clients.

A free trial of the iPad version is available that limits sessions for 5 minutes.

Saturday February 4, 2023 10:05 am PST by Eric Slivka
Online retailer TigerDirect has slashed pricing on the M1 iPad Air in several colors, offering the base 64GB configuration for just $313.99 in Purple and Pink. Note: MacRumors is an affiliate partner with TigerDirect. When you click a link and make a purchase, we may receive a small payment, which helps us keep the site running. That's a savings of 48% compared to Apple's normal $599.00...
Read Full Article • 514 comments