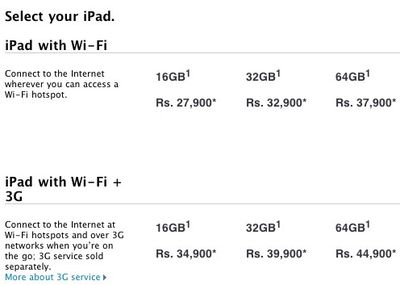 Apple executives noted during the company's quarterly earnings conference call last week that the iPad was available in 46 countries, with 15 countries being added over the month of January. India obviously represents one of the largest potential markets for the device, although Apple has had only limited success with other offerings such as the iPhone there due to the price-sensitive nature of the market. Despite India's large population, Apple has not yet invested significant resources in the country and has even yet to launch the iPhone 4 there.

nigameash
Its quite simple actually. It doesn't matter whether people are willing to splurge or not. When Mercedes Benz entered India in the 90s, it was selling worthless crap which was outdated in the international market. All the people who could afford one had travelled abroad and had seen the new models. Thus nobody would touch a Mercedes coz it was a piece of trash. Once Mercedes understood this, they introduced the latest models in India. They've been minting money ever since.

The day Apple realizes this, it will conquer the market. Apple is far superior in terms of technology and software as compared to its competitors, Indians just don't know it yet. Its not about money or prices, its about how well you market your product and how many locations you are accessible at. China has multiple Apple stores and has had it for quite some years now. India still does not have the iPhone 4 and I really hope nobody buys it when it launches coz Apple deserves that for not paying enough attention to the country.
Score: 1 Votes (Like | Disagree)
Read All Comments