Market research firm ChangeWave Research today announced the results of new survey examining the impact of the Verizon iPhone on customer carrier preferences. While the survey of professional and early-adopter consumers was conducted in late December, ahead of the official Verizon announcement, the general media consensus at the time had been that a Verizon announcement was imminent.

Among the findings of the survey was a surge in the percentage of AT&T subscribers planning to change carrier over the subsequent 90 days, rising to 15% from 10% just three months earlier.

Importantly, when we compared the churn rates for the top wireless providers, we found major differences.

Related to that spike was a result showing that 16% of surveyed AT&T customers were planning to switch to Verizon if it began offering the iPhone, with an additional 23% of AT&T customers registering as unsure whether they will switch carriers. 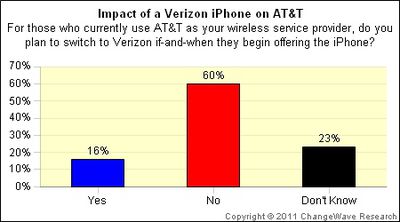 That metric was even higher among AT&T's iPhone customers, with 26% of them saying they would leave AT&T for a Verizon iPhone. While most AT&T iPhone customers are currently tied into long-term contracts, many of them are apparently ready to jump ship anyway, with 41% of those planning to switch saying they will do so within the first three months of Verizon iPhone availability and an additional 31% doing so within a year.

ChangeWave has also continued to track reports of dropped calls on the major carriers, an area where AT&T has struggled mightily. The most recent survey did in fact find some good news for AT&T in this area, with its dropped call rate falling to 4.7% in December from 6% as measured in September. But despite clear improvement presumably related to network improvements, AT&T's call-drop rate remains far above that of Verizon's 1.7% figure.