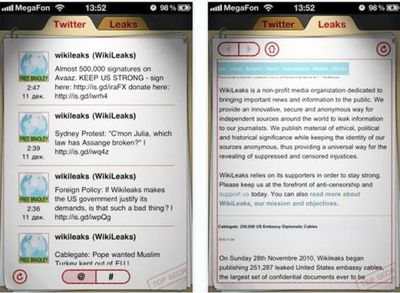 As shared in a Tweet from the app's developer, Igor Barinov, the application was "removed from sale" by Apple less than three days after it was approved.

Basically the paid app was selling WikiLeaks content (available for free) for $1.99. Its entry into the app store on December 17th was actually surprising, as Apple is usually quite strict and somewhat vague about its app approval standards. WikiLeaks and founder Julian Assange are quite controversial, to put it lightly but I'm not sure if the app directly violated anything in Apple's TOS.

In the past couple of weeks corporate biggies Amazon, PayPal, Mastercard, Visa and Bank of America have all tried to disassociate themselves in one way or another from WikiLeaks. If this isn't some kind of glitch, Apple has plenty company.

Barinov claims that of the $1.99 purchase price for the unofficial WikiLeaks App, $1.00 would be donated to WikiLeaks, leaving only about 40 cents per sale for Barinov after accounting for Apple's take of the revenue.

We have yet to hear word from Apple on an official reason for the removal.

Update: While Apple still has yet to provide an official reason for the removal, it is possible that the application simply ran afoul of Apple's rules regarding donations. Apple's review guidelines require that application soliciting donations be free and that donations be made to recognized charitable organizations via either a website or SMS. The donation aspect of the application had been noted in its App Store description:

One Dollar For Internet Freedom

Internet democracy requires funds to stay strong. By purchasing the Wikileaks app, you donate 1 dollar of the purchase price towards organizations that work to promote the future of online democracy.

Update 2: Business Insider received word from Apple that the application was in fact pulled due to the content and not App Store rules regarding donations:

We reached out to Apple for comment on why it pulled the app and here's what a representative told us:

"We removed WikiLeaks because it violated developer guidelines. An app must comply with all local laws. It may not put an individual or target group in harms way."

Apple declined to elaborate on the "individual or target group" it had determined was placed in "harms way" by the application.