Just over a year ago, Apple began rolling out an iPod-based checkout system known as "EasyPay" in its retail stores. A few months later, it was reported that Apple was considering commercializing the system. The system has been marketed for some time now as Linea Pro by its creators, Infinite Peripherals, who offer it as a $499 accessory for the second- and third-generation iPod touch. 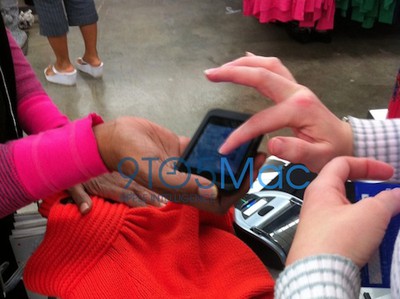 It is unclear how many other customers Infinite Peripherals has been able to sign on to the technology, but 9 to 5 Mac reports that The Gap's Old Navy retail store chain has been piloting usage of the system, known there as "ZipCheck", in a few of its stores. According to the report, Old Navy is piloting one ZipCheck system per store, with some employees also carrying small wireless printers on their belts to quickly provide customers with receipts for purchases made through the device.
[ 49 comments ]

Friday May 14, 2021 11:52 am PDT by Juli Clover
Following the discontinuation of the iMac Pro, Apple also appears to be discontinuing Space Gray "Magic" accessories that it sold separately alongside the iMac Pro. The iMac Pro was the only Space Gray Mac, and Apple designed special matching accessories for it. The Space Gray Magic Mouse 2, Magic Keyboard, and Magic Trackpad all now say "While supplies last" in small wording at the bottom...
Read Full Article • 328 comments

Saturday May 15, 2021 11:08 am PDT by Juli Clover
Twitter has been working on some kind of subscription service since last summer, and Jane Manchun Wong, who often digs into new features coming in apps, has shared details on just what Twitter is exploring. Twitter's subscription service could be called Twitter Blue, and at the current time, it's priced at $2.99 per month. There will be a "Collections" section that allows users to save and...
Read Full Article • 106 comments