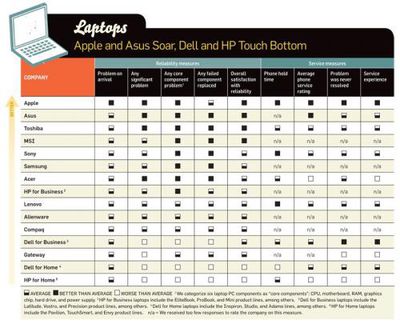 Over the weekend, PC World published the results of its annual reliability survey, incorporating reports from 79,000 tech users to assess customer satisfaction with reliability and tech support for a wide variety of products. As in previous surveys, Apple topped the rankings in an assortment of categories, with PC World going as far as to say that Apple "once again smoked the competition", despite a few stumbles from the iPhone.

Apple once again smoked the competition in the desktop, notebook, and smartphone categories, winning high praise from customers in all reliability and service categories. The Macintosh and iPhone maker did so well that virtually all its scores were above average. Apple's only average scores were related to the company's deftness at replacing failed notebook components, and in two areas pertaining to serious problems with the iPhone, the latter perhaps stemming from the iPhone 4's well-publicized antenna issue that resulted in dropped calls for some users.

The report points to Apple's use of high-quality components and a straightforward software experience for providing customers with high levels of satisfaction. In addition, the company's retail stores with Genius Bars offering service and support are seen as a key component to Apple's customer care initiatives.

In the desktop category, Apple, Asus and Alienware topped the rankings, with Apple receiving "above average" ratings in all nine categories measured. According to the survey, under 9% of customers surveyed reported an issue that was unable to be resolved by Apple's support staff, significantly better than the 21% industry average.

It was a similar story for the laptops, where Apple received above average scores in eight of nine categories. Apple scored only "average" in its performance when it comes to replacing failed components. Apple was followed in the rankings by Asus and Toshiba.

When it comes to smartphones, Apple's iPhone swept the top spot with above average ratings in all five categories related to ease of use. But Apple trailed Motorola's offerings in the reliability portion of the survey, ranking above average in two categories and merely average in two categories related to problems experienced out of the box and severe problems experienced by users. In general, the report noted that users are very satisfied with the iPhone itself but frustrated with carrier partner AT&T, which ranks last among major U.S. carriers in PC World's survey of network service.