We've heard that the new iPod nano and iPod Touch will be arriving in Apple retail stores tomorrow, and the first reviews are starting to filter in. 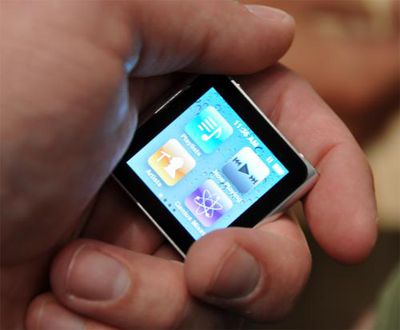 The iPod nano is the most dramatically different device in Apple's lineup. The nano embraces a fully multi-touch interface rather than the familiar click-wheel of previous models. Engadget seems to think that the move is a positive one:

While that screen is small, it's not hard to get around in, and the touch response seemed about as tight as it is on the new touch or iPhone. Multitouch rotation worked just fine, and in general use, moving from place to place with the new nano was considerably faster than on previous models. Overall, we think the design is a big step forward for this line of players.

While the nano resembles iOS, Apple has said it is not actually running their mobile operating system and was simply made to resemble it. Macworld agreed that many tasks (scrolling, flipping between photos) were much improved with the multi-touch display over the click wheel, but noted some inconsistencies in the interface due to the small size of the display.

The iPod Touch finally gets many features that were previously iPhone-exclusive. This includes a front and back camera, gyroscope, A4 processor, Retina display and vibrate function. The new iPod Touch apparently doesn't have quite the same high quality IPS display as the iPhone 4, but in real world terms, Engadget claims the difference isn't concerning. Overall, it seems the upgrades are not surprising if you have any familiarity with the current iPhone. The new iPod Touch does come with iOS 4.1 already installed, and we expect Apple to release it for existing hardware sometime tomorrow.

PCMag, USA Today and CNet have further reviews of the iPod Touch.

The original iPod touch had no speaker, volume rocker, camera, or microphone. Why? To differentiate it from the iPhone. Even by the third generation, Apple refrained from adding a camera because then it would be too similar to the iPhone, and cannibalize sales from their flagship device.

Now the iPod touch has two cameras, a microphone, gyroscope, A4, and a retina display. The only iPhone features missing from the touch are the compass, GPS, light, IPS display, and of course the cell radio. Now that the iPod touch can do FaceTime, VOIP, scanning, and all the wonders a camera enables, won't it steal potential AT&T costumers from the iPhone 4?

Last year, Steve pushed the iPod touch a gaming device, but this year he called the iPod touch "an iPhone without the contract." He implies that anyone who can stand a contract can get an iPhone. But as it stands right now, the iPod touch is still "an iOS device for those unwilling to switch to AT&T."

Like many people, I own an iPod touch ONLY because I cannot own an iPhone 4. (I also would not have bought a GPS or a point and shoot camera if I had an iPhone.) Apple has sold iPhones to just about every American willing to switch to AT&T. Everyone else makes do with the iPod touch. If the iPhone lost exclusivity, iPod touch sales would fall dramatically, solely due to the iPhone's biggest feature: access to the internet without WiFi.

The first iPhone added little to the experience of using a phone. But it was the most advanced iPod/PDA ever made, and a significant portion of people already happy with their phone/carrier bought the iPhone and unlocked it, until the iPod touch stole that market three months later.

The new iPod touch adds nothing to the iPod experience. Instead, it added the best features of the iPhone, besides the radio. The iPod touch will sell very well through the holiday season.

...That is, until the iPhone drops exclusivity early next year. :) Then the iPod touch will truly become "the iOS PDA without a phone", instead of "the iOS PDA for people who wish it was an iPhone too."