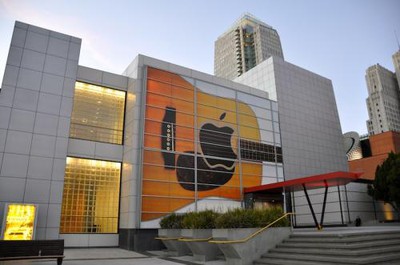 Yerba Buena Center for the Arts prepped for Apple's media event
The Wall Street Journal reports that Apple will launch its 99-cent TV show rentals through the iTunes Store tomorrow, with Fox and ABC set to serve as launch partners for delivering content. A report earlier today had indicated that Walt Disney (which owns ABC) was on board with that plan and that News Corp. (which owns Fox) was undecided but leaning toward participating.

As part of the Apple event Wednesday, News Corp.'s Fox and Walt Disney's ABC networks are slated to be announced as offering 99-cent rentals of television shows through the iTunes store, according to people familiar with the matter.

According to the report, Fox's participation will be limited in duration, at least to start, and will be limited to shows such as Glee, Bones, and Lie to Me for which it owns both the production and broadcasting rights.

Echoing the report from earlier today, the new article claims that a number of News Corp. executives are uneasy about Apple's plan, fearing a disruption of the traditional television business. The company ultimately agreed to go along with Apple, however, as an experiment in alternative means for delivering content to consumers and in order to win goodwill with Apple to set stage for partnerships in other digital content ventures.