In a brief note, DigiTimes points to a report [Google translation] from Taiwan's China Times claiming that Apple is preparing to launch a 22-inch touchscreen iMac in the second half of this year. Longtime manufacturing partner Quanta is among the companies expected to receive orders to build the new iMac.

The report notes that the popularity of "all-in-one" computers like the iMac is surging, with unit sales set to double in 2010 as other competitors such as Dell ramp up their offerings. In order to meet the challenge from these competitors, Apple will reportedly look to the touchscreen offering as continued means of differentiating itself.

Today's report also claims that Apple's highly-anticipated tablet will launch later this month, and will include a 9.7-inch screen.

A touchscreen iMac would be nice as long as the monitor was made to not show fingerprints. 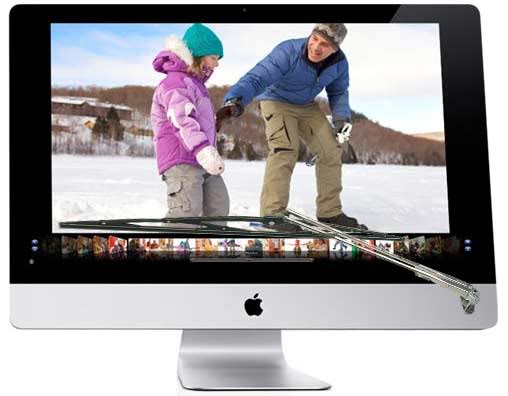 You saw it here first.
Score: 2 Votes (Like | Disagree)

You would get quite a workout having to do everything on a 22" touchscreen.
Score: 2 Votes (Like | Disagree)

MaskedMuscle
The majority of the comments posted about a the negatives of a touchscreen iMac are irrational. Here are some of the brainless remarks and some logical retorts.

1. Fingerprints and germs on the screen... Everything you have in your home and office gets touched--books, papers, pens, carpet, pillows, etc. Many are difficult to clean, but an LCD screen is smooth and can be cleaned easily and has the potential to be way cleaner than everything else you have since you can actually see the dirt and grease on it, rather than having it hidden inside of your mattress pad or within the keys on your keyboard.

2. Reaching up and out across the desk would be tiring... True, but why on earth would a company whose designs are usually so good design a touch computer meant to be used across your desk? When is the last time you taped your newspaper onto the wall across your desk rather than placing it down on the table and angling it up to you. They would have to design in like a drafting desk and I am sure would only consider that.

3. Typing on a virtual keyboard for any length of time would be cumbersome... OK, now that is true since you have no tactile feedback about where your fingers are.

4. A touchscreen would make it tiring and will cause tendinitis or the like... When a person does paperwork, reads the newspaper, reads a book, they touch and move their arms several times more than you do with a mouse. Years ago people used to do things with their arms and hands without any problems. Now we see people thinking they are getting injured because they are moving, but what would happen when a terribly out of shape, inactive person (like most of us today) with muscular atrophy tries to play football? They would get hurt. Inactivity causes problems, not activity.

5. Other Windows all-in-one desktops have failed and shown us how hard to use they are, and therefore have no point. ...Since when were Apple's designs ever comparable to the Windows machine counterparts? It seems logical to me that computing (in all senses) is on a path that makes it more realistic, presenting computing as a viable virtual alternative to real life. Since when in real life do you view a photo album and proceed to view the next picture by moving a tiny little pointer to a tiny little "next" arrow and press down with your right pointer finger? I just flick page over.

Now, with that said, I still have no clue as to whether or not Apple will release such a product, nor if it will sell well or not. I just wanted to give my thoughts and some feedback on what everyone else has been saying. Call me crazy but everyone seems crazy to me.
Score: 1 Votes (Like | Disagree)

CWallace
My company uses plenty of Panasonic Toughbooks with touchsceens and I find it to be something I use in addition to a mouse or touchpad, not exclusively in place of.

MacDaddy901
I highly doubt this rumor. I think Jonathan Ive knows that it makes no sense to have a touchscreen monitor. A mouse does just fine.
Score: 1 Votes (Like | Disagree)
Read All Comments