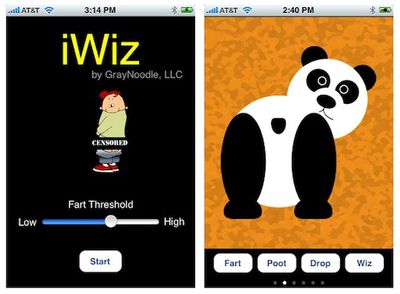 Shoemaker's "iWiz" (left) and "Animal Farts" (right) App Store applications
Wired has discovered that Phillip Shoemaker, Apple's Director of Applications Technology for the App Store, is a former App Store developer himself who has a handful of applications, several of which fall into the category of low-brow fart and urination humor, still available for sale. Shoemaker's App Store development work was handled under the name GrayNoodle LLC.

"Simulate the experience of urinating for a long time," iWiz's app description reads in iTunes. "Convince your friends that you'll never stop. iWiz allows you to simulate urination: faster, slower, or just a trickle."

According to an Apple spokeswoman, all of Shoemaker's applications had been approved prior to his employment with Apple.

"Phillip's apps were written, submitted and approved before he became an Apple employee," an Apple spokeswoman said in a statement. "His experience and perspective as a developer is one of the valuable things he brings to Apple's developer relations team. Apple's policy allows for employees to have apps on the App Store if they're developed and published prior to their start at Apple."

Apple's statement is apparently contradicted, however, by App Store data showing that three of his applications debuted in the App Store up to six weeks after Shoemaker had tweeted that he was working for Apple in early March 2009.

Shoemaker's LinkedIn profile prior to removal of GrayNoodle reference
Since the publication of Wired's article, Shoemaker has deleted his Twitter accounts and updated his LinkedIn page to remove mention of his connection to GrayNoodle and the apps in question.
[ 149 comments ]