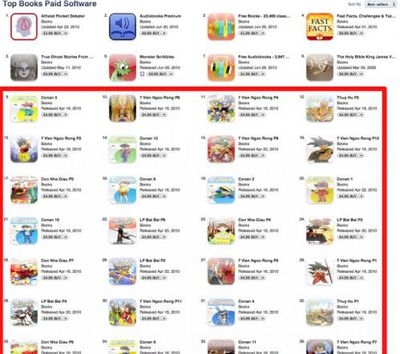 Earlier today a report on TheNextWeb claimed that the App Store had been hacked and that a rogue developer had gamed the system by artificially driving sales to their eBooks. The rise in ranks were noted by competing developers who thought the rise strange given that the books all represented poorly coded Vietnamese-based books.

A couple of reviews left on one of the books revealed that at least two customers had their iTunes accounts compromised to purchase the books. This led to theories that a widespread attack specifically tied to this developer could be the cause of the rise in ranks. Which then led to a cascade of headlines suggesting that everyone's iTunes account was suddenly vulnerable to a coordinated attack. While we do believe that this developer had been trying to game the iTunes ranking system, it's hard to believe that their efforts affected more than a few hundred accounts worldwide.

The Book category in which we found these apps (note, they've been pulled from the App Store) is one of the lowest trafficked categories in the App Store. Based on sales reports we've received from developers, the number of daily sales required to hold a book in the #10-#50 rank seems to range from 50-250 sales a day. That means that even if every sale was based on a compromised account (unlikely), the actual number of accounts involved are minuscule compared to the 100 million active iTunes accounts.

Now, on a separate note, the issue of hacked or compromised iTunes accounts is a major issue, and one not to be dismissed. However, this issue has been ongoing for years and we're not convinced there has been a major spike in activity. iTunes accounts are easy targets since they are so common. In our forums we have had a running thread on the topic since January 2008. A few reports appear every few months. There do seem to be a higher number of reports arising the past day or two of other iTunes accounts being hacked. It's certainly possible there has been an acute rise in the past few days, but the added press coverage will certainly attract more stories. Meanwhile, a blog post from 2009 similarly attracted a number of "me too" reports. The cause of the iTunes accounts to be compromised are almost certainly due to phishing attempts and the like rather than any insecurity on Apple's iTunes, itself.

hypoh
Some of you guys sure are cynical.

My password is not dictionary-list crackable. I'm on a Mac, not PC. I know a phishing attempt when I see one. No, there is no keylogger on my Mac. No, a friend did not use my computer to buy $50 worth of iTunes apps at 4am in the morning.

I'm not perfect, and I'm not saying iTunes was "hacked." Just adding my story to the mix.
Score: 1 Votes (Like | Disagree)
Read All Comments