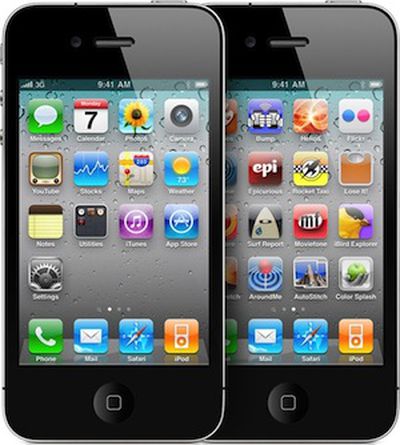 As has been widely discussed, while the iPhone 3G and second-generation iPod touch are compatible with Apple's iOS 4 released yesterday, they do not support all of the features of the updating operating system. Multitasking has been the highest-profile feature unsupported by these older devices, but Apple has also noted (iPhone, iPod touch) three other unsupported features: Bluetooth keyboard support, home screen wallpapers, and data protection.

The inclusion of custom home screen wallpapers has been questioned by a number of users, as it does not initially appear that the feature should require particularly advanced hardware. Gizmodo reports that one user emailed Apple CEO Steve Jobs to ask about the issue, and received a response noting that unsatisfactory performance of icon animations on top of the custom wallpapers was the reason for the omission.

Without a doubt, BS. It's called planned marketing obsolescence.

Apple, EASILY, could release IOS 4 for the original iPhone with at least some of its features.

It did. Folders for example. However there is only so much you can do software wise when the limitation is in the hardware. Unless you are talking about the 2G, but this thread is titled for 3G so I will assume thats what you are talking about. If you are saying 2G, then sorry but your device isn't any less without the new features.

Apple is starting to become a parody of comedy bits about itself.

Everyone has to have a new "MAPPLE" product, yet everyone hates how the company treats them afterwards. (Simpsons episode)

Seriously? Are you serious? What other company provides a constant stream of free software updates to a mobile device? Apple can't work miracles, they can't get certain parts of software to run on a device that CAN'T SUPPORT IT. Thats the same reason your original XBox can't play XBox 360 games, and why the PS2 can't play PS3 games. USE YOUR HEAD.

You would think Steve Jobs, after a liver transplant, would grow up and start treating his customers who spent over $500 on an original iPhone better, but nope.

Jobs is still the same spoiled brat who treats his customers like $HlT and disowns his own child.

How can you say this? Hm? Does Microsoft treat the customers who purchased the original XBox better still? Does Sony treat original PS2 buyers better still? Does World of Warcraft treat its 4 year straight @ $15/mo subscribers better? NO. Want new features? Buy a new XBox, buy a new PS3, buy the new WoW expansion, and keep PAYING. That's what companies do. You have gotten free updates to the OS for years now! What more do you want?! Why don't you actually try some programming and see if you can work miracles when hardware is the limitation...

Him and Warren Buffet are starting to look like a world leaders, yet Jobs hasn't changed one bit. That's a shame. Apple has more value now than Microsoft and Steve Jobs has a new liver and doesn't have a freaking care in the world. F the customers.

F the customers? By not providing wallpapers? How old are you? Honestly, I feel like I am reading something a uneducated 10 year old wrote.

Who cares? The lemmings will still buy more insanely great products and toss the old ones in the trash just to contribute to global pollution just because Steve Jobs tells them to, not because the device is outdated. Wonderful. Good way to save that billions of dollars in the bank Steve.

[tosses original $500 iPhone in the landfill with everyone else]

Ugh, you are such a ignorant uneducated person I don't know how to even properly respond to you. I wish I could meet you in person and actually have a debate with you and see how long it takes before you just collapse due to a lack of knowledge on the topic at hand.

A few points for you, buddy:

* When you purchased the original iPhone, were you EVER promised Folders? Multiatasking? Wallpapers? Answer: NO! You were NEVER told you would get those things and you are NOT owed them
* Did you purchase your original iPhone with the thought that you would be able to use custom wallpapers? NO! Why? Because that was NEVER an option back when you decided to purchase your device.
* Does your iPhone perform the EXACT SAME TASKS it did back when you purchased it originally? YES!
* Has ANY functionality been REMOVED from the device that was there in the past? NO. You have the SAME phone you have always had


Conclusion: You purchased your iPhone because it was able to perform certain tasks. Through free software updates that Apple released (none of which you were owed or were entitled to) your phone started doing MORE than it could when you originally purchased it. Your phone was made BETTER through free software updates, that once again you were never owed in the first place. GROW UP.
Score: 1 Votes (Like | Disagree)

They aren't missing much, I find the screen a lot harder to read andd switched to the darkest wallpaper I could. Can't find an option for a plain black screen anywhere yet.


I put the phone on a table and took a picture of nothing, then used that. I wish it had a 'no background' button because unless it's smart enough to figure out my black background is really black, then it's probably rendering invisible shadows on the icons I don't need and slowing the phone down. Backgrounds under the icons was ugly, not providing a black background was stupid, not providing a no-background option was ridiculous.

How stupid does he think we are?


Are you new to these forums? It's full of people that actually think Apple cares about them.
Score: 1 Votes (Like | Disagree)

wujonathan1994
I know....I know the raging crappy multi-task doesn't fit my I touch 2 GEN... but is it too much to ask a damn friggin wall background??:mad:
Score: 1 Votes (Like | Disagree)

duncanapple
Everyone does know that you can barely even see the wallpaper through the icons, right? :rolleyes:
Score: 1 Votes (Like | Disagree)

ouimetnick
Well on my Original iPhone who died several months ago, I could have it jailbroken, an have backrounder for multitasking, MMS to send photos, Video recording (was great in light, but was terrible in lower light locations) I had themes or I could stick with the default Apple springboard with a background. Being honest, multitasking was great. The phone took so log to open up iPod, Safari and messages, so I enabled them to run in the background, and they opened the millisecond I tapped on their icons.

Even with a background and backrounder for multitasking, tr battery still lasted a day and a half, and the animation wasn't anymore laggy as it had already need on stock firmware.

Apple should give 3G users things like BT keyboard and wallpaper. Fine with me, do add shadows to icons, but if I can get all the features from a 3GS on an Original iPhone, the hardware I capable enough.
Score: 1 Votes (Like | Disagree)
Read All Comments