The reason everyone is so interested in the leaked Apple iPhone goes beyond natural interest in the product. It's just that Apple usually does such a good job at keeping the their hardware under wraps. The lost iPhone(s) are easily the largest leak in the company's history.

Of course, Apple's labs are always brimming with activity, and many of these prototype designs eventually fall into the hands of collectors in the years to come. Here are a few interesting ones that were successfully designed behind closed doors. 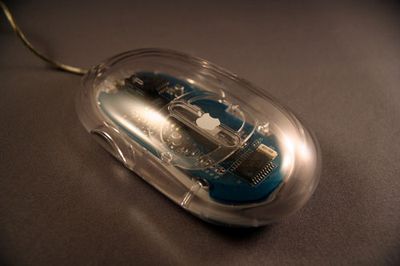 From Flickr/steevil
A clear-case Prototype Apple Mouse apparently given to some Apple employees. It's labeled "Prototype" on the bottom and lights up when the it's plugged in.

From Flickr/Abeles
A metal industrial design prototype of the Apple Macintosh G4 Cube. The production cube was, well, closer to the dimensions of an actual cube. The final Cube design was actually leaked prior to its release, though there were a lot of doubts about its authenticity at the time.

From Flickr/mwichary
Apple's tablet efforts go back a long way. This PenLite design is from 1992 and represents a pen-based Mac built from a Powerbook design.
[ 41 comments ]