For the last several years, netbooks have been a booming business for a number of computer manufacturers as consumers look for low-cost, portable machines to browse the Internet and perform other light tasks. Apple resisted entering the netbook market, repeatedly pointing to numerous shortcoming of such devices as it wrapped up development on its iPad tablet device, its own take on how consumers will want to consume music, video, and Web content in a portable form factor. 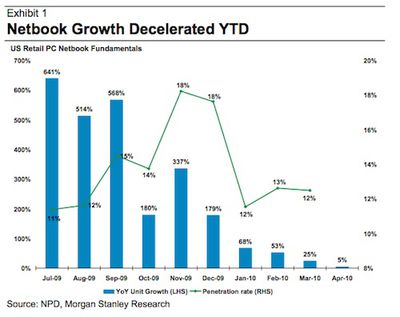 Fortune today reports on a new note from Morgan Stanley research analyst Katy Huberty that reveals just how dramatically growth in the netbook industry has slowed since the beginning of the year. Huberty attributes the slowdown to Apple's iPad, which saw tremendous publicity leading up to and since its introduction in late January.

As her chart (above) shows, sales growth of these low-cost, low-powered computing devices peaked last summer at an astonishing 641% year-over-year growth rate. It fell off a cliff in January and shrank again in April -- collateral damage, according to Huberty, from the January introduction and April launch of the iPad.

Huberty also cites data from March showing that 44% of surveyed consumers who were planning to purchase an iPad were doing so instead of purchasing a notebook or netbook computer, the largest category of cannibalized products. Notably, over half of those customers were planning to purchase an iPad instead of an Apple notebook, with the remainder forgoing a non-Apple netbook or notebook.

Also of note, a full 41% of those surveyed said that they would be purchasing their iPad instead of an iPod touch, suggesting that Apple may take a hit to that portion of its sales going forward. The news isn't as bad as it appears, however, as Apple is undoubtedly happy to be keeping those customers in the Apple fold and "upselling" them to the more expensive iPad.
[ 130 comments ]