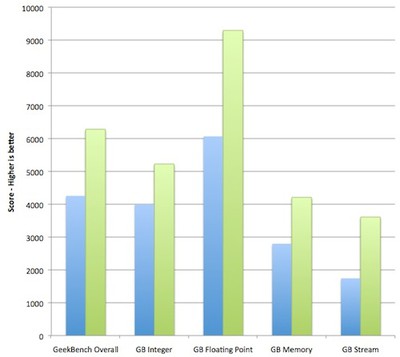 The preliminary testing utilized two standard benchmarking utilities, Geekbench and Xbench, as well as a test of video re-encoding with 64-bit Handbrake. The Geekbench and Xbench results showed about 50% improvement over the previous-generation model in overall scoring, although the individual Xbench scores varied fairly significantly from only marginally better in Quartz and CPU tests to over twice as high in Thread and OpenGL tasks.

The performance gains come despite increased battery life in the new models, a result of more energy efficient components and a slight bump in battery capacity for the latest models. Apple's automatic graphics switching will enable seamless shifting between discrete and integrated graphics processors, allowing for maximum horsepower for tasks such as the benchmarks used above and maximum battery life for less power-hungry tasks.