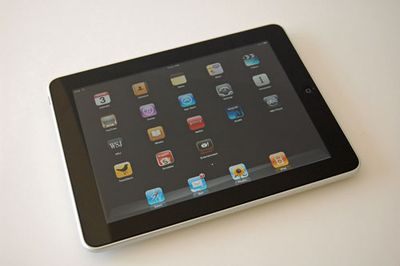 As today's launch progresses, iPads are starting to get into the hands of many across the U.S. As we get settled with our own iPads, here are a few first impressions:

- The iPad feels very substantial in the hand. At 1.5 lbs, it takes a bit of getting used to compared to an iPhone or Kindle.
- The screen is bright and crisp with wide viewing angles. Despite the oleophobic coating, it collects and shows fingerprints more than expected.
- The Apple logo on the back is black with a smooth finish, not with a chromed finish like on the iPhone 3GS.
- The iPad must be connected to iTunes in order to set it up. Out of the box, it shows a connect to iTunes screen (you must have iTunes 9.1).
- Set-up via iTunes is similar to that of the iPhone, allowing you to select the apps and media content to be synced to the iPad.
- The capacitive touchscreen is fast and responsive. Screen orientation changes take place almost instantly.
- The on-screen keyboard in portrait orientation is usable with two thumbs but the middle keys will be a bit of a stretch for those with smaller hands. The keys are nice and large so it's hard to miss the intended key and the predictive entry also found on the iPhone helps as well.
- Typing with two thumbs in landscape orientation is much harder and a case or some other way to prop it up to see the screen while typing with two hands is the best approach.
- Apps not yet optimized for the iPad are usable in 2x mode but leave much to be desired. iPad-optimized apps are really where it's going to be.
- Sound out of the iPad's speaker is richer and louder than expected and is sufficient for watching a movie in a quiet environment.
- The standard apps have been adapted very well to the iPad's larger screen. The iTunes Store and the App Store are a pleasure to browse on the iPad.

Just us in our iPad forum for questions/discussion. Meanwhile, other reader first impressions are still being collected in this thread.

TouchArcade is covering iPad gaming in detail, while AppShopper has a running list of iPad apps and discounts.