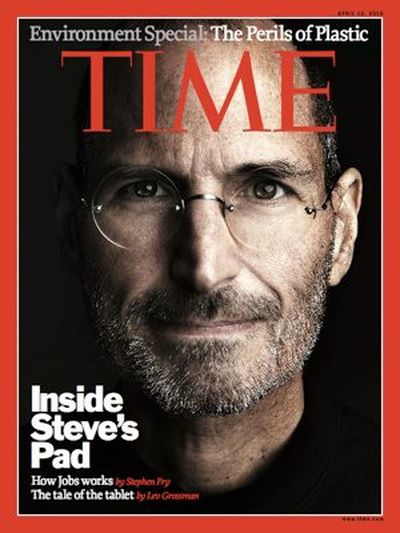 Apple CEO Steve Jobs and the iPad are set to be the cover story for the upcoming issue of Time, and as part of the coverage, British actor/comedian Stephen Fry describes his visit to Apple headquarters to learn about and play with the iPad, as well as to meet Jobs himself. Yesterday, Fry posted a video of the unpacking of his iPad and associated accessories.

While Fry's lengthy Time article offers little in the way of new information on the iPad, it does provide an interesting glimpse into the Apple mystique, and his conversations with Jobs and other Apple executives share some of the giddy excitement and nervousness that many Apple fans would likely feel if granted inside access to Apple's devices and top minds.

I have met five British Prime Ministers, two American Presidents, Nelson Mandela, Michael Jackson and the Queen. My hour with Steve Jobs certainly made me more nervous than any of those encounters. I know what you are thinking, but it's the truth. I do believe Jobs to be a truly great figure, one of the small group of innovators who have changed the world. He exists somewhere between showman, perfectionist overseer, visionary, enthusiast and opportunist, and his insistence upon design, detail, finish, quality, ease of use and reliability are a huge part of Apple's success.

During the interview, Jobs offers a sentiment shared by Fry that the revolutionary and immersive nature of the iPad can not truly be felt until one gets their hands on and uses it. Unlike smartphones, which were a relatively obvious evolution for mobile phones, the new generation of tablet devices which are being led in mindshare by the iPad must create their own market space, and to do so the experience must be compelling.

"I think the experience of using an iPad is going to be profound for many people," he says. "I really do. Genuinely profound." That rings a bell. "I've heard it said that this is the device for you," I reply. "The one that will change everything." "When people see how immersive the experience is," Jobs says, "how directly you engage with it ... the only word is magical."

Fry closes his profile with an interesting observation that it is a shame that his good friend Douglas Adams is no longer alive to see what is the closest device yet created to his famed Hitchhiker's Guide to the Galaxy.