Just two days ago, App Advice reported that Apple's iBookstore, set to launch in the U.S. on April 3rd alongside the iPad, was displaying $9.99 prices for the vast majority of eBooks from The New York Times best sellers list. Only a few titles were set at different price points, maxing out at $12.99 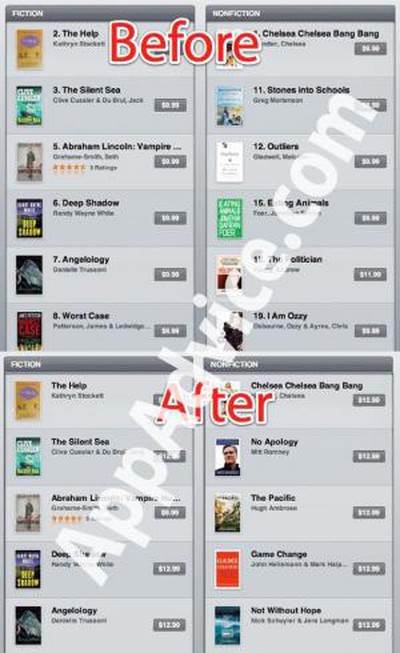 Today, however, the site reports that pricing for the same eBooks has shot up, with most of the content formerly priced at $9.99 now checking in at $12.99.

This sudden change is extremely intriguing. Is Apple using this to figure out where the leak is coming from? Did Amazon react to our announcement and pressured publishers to rise the prices? We don't know. It also remains to be seen if these price changes are just temporary of definitive.

Of the six identical titles visible in the before-and-after screenshots, five of them have been bumped up to $12.99, with only Abraham Lincoln: Vampire Hunter remaining at $9.99. Consequently, it appears that Apple's iBookstore plans remain in flux with just a week to go before the store's launch, and we may have to wait until April 3rd to see how things truly shake out.