iBookstore to Include 30,000 Free eBooks From Project Gutenberg? 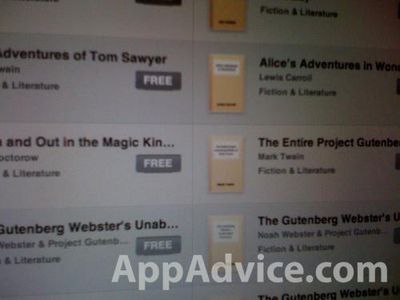 Following up on yesterday's report regarding $9.99 price points for most best sellers in Apple's iBookstore, App Advice now reports that it has observed a significant number of free titles from Project Gutenberg included directly in the store.

If you're not familiar with the Gutenberg Project, it's a free online digital library supported by volunteers. This library already includes over 30,000 free eBooks from the public domain; it is an amazing popular resource.

Well, when checking out Apple's iBookstore, I noticed that Apple has decided to include these directly. I obviously haven't had the chance to count them, but it appears that the entire catalog is available for free download.

Apple's iBooks feature page posted earlier this month confirmed that the iPad's iBooks application will support the open ePub standard used by Project Gutenberg, so its contents' compatibility with the iPad is not unexpected. Integration of Project Gutenberg content directly into the iBookstore for free download, however, is undoubtedly welcome news for many readers.

iBooks and the iBookstore are scheduled to launch in the U.S. alongside the iPad on April 3rd.

Saturday May 21, 2022 9:00 am PDT by Hartley Charlton
With around four months to go before Apple is expected to unveil the iPhone 14 lineup, the overwhelming majority of rumors related to the new devices so far have focused on the iPhone 14 Pro, rather than the standard iPhone 14 – leading to questions about how different the iPhone 14 will actually be from its predecessor, the iPhone 13. The iPhone 14 Pro and iPhone 14 Pro Max are expected...
Read Full Article • 327 comments