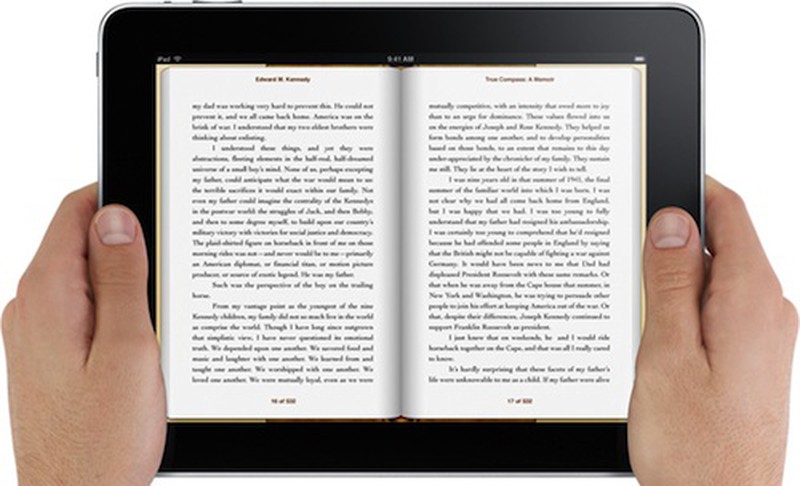 iBooks Application in Landscape Orientation
Apple has augmented its iPad "Features" section with a new page devoted to its iBooks application. Initially available only in the U.S., the iBooks application will be available in the App Store once the iPad officially launches on April 3rd and will serve as the hub for the iPad's eReader functionality and offer access to Apple's iBookstore where users will be able to purchase content. While many of the details of the iBooks application have already been disclosed, the feature page provides a slightly more in-depth look at the application and clarifies a few issues.

Apple confirms that the application will utilize the open ePub standard, which will allow users to import any open ePub content into iTunes and sync it with their iPad for viewing, even content not acquired through the iBookstore. Apple has been quiet about any sort of digital rights management (DRM) for content sold through the iBookstore, but reports have suggested that it will utilize a version of Apple's FairPlay DRM that was formerly used on iTunes Store music and continues to be used on video content distributed via iTunes.

The new iBooks page also describes a number of the features of the application, including the ability to automatically switch between single-page portrait and double-page landscape modes by simply rotating the iPad and to change text sizes and fonts. Users can also tap on words within their eBooks to see definitions from the device's built-in dictionary application or Wikipedia, or search for the word in the text or on the Web. iBooks is also compatible with the iPad's VoiceOver functionality, allowing content to be automatically read aloud.

While iBooks will be a U.S.-only feature at launch, Apple appears to be busy preparing to build out support for the application and the associated iBookstore, with job postings suggesting that the company is working hard to extend support to other countries.

Saturday May 30, 2020 4:00 pm PDT by Eric Slivka
Apple today doubled the price for upgrading the RAM on the entry-level 13-inch MacBook Pro, with customers in the United States now being charged $200 to move from 8GB to 16GB compared to the previous $100 upgrade price. Similar increases are seen in other countries, such as moving from €125 to €250 in Germany and from £100 to £200 in the United Kingdom. Current pricing on RAM upgrade for ...
Read Full Article • 251 comments