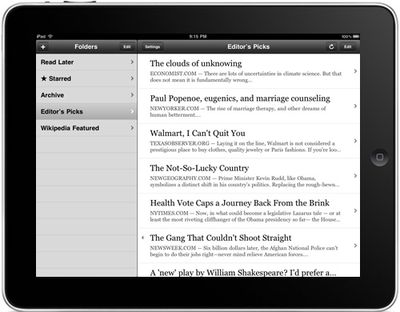 Developer Marco Arment yesterday announced that his popular Instapaper service for saving Web content for later reading will be coming to the iPad, hopefully in time for the device's launch on April 3rd. The service, which currently offers a pair of iPhone/iPod touch applications including the limited Instapaper Free and the more powerful Instapaper Pro ($4.99), downloads text-only versions of Web content and saves them to a user's free account for later reading on a variety of devices.

In his blog entry, Arment offers some preview screenshots and discusses his motivations for developing iPad-specific versions of Instapaper. (Instapaper Pro will be a universal application for both iPhone and iPad, requiring users to only purchase the application once.)

Once I nailed down a few definite iPad-friendly features, I realized that I could port all of them to the iPhone version of Instapaper Pro. And if I did that, all of my customers (and I) could use these great new features now.

So, rather than rewriting my entire interface for the iPad over the two months that we've had, I spent the first few weeks finishing and launching the 2.2 update to my iPhone app, a major undertaking that added a lot of great features, using techniques that would allow me to easily adapt all of the features to the iPad. And I spent the remaining time adapting my interfaces, rewriting or modifying where necessary, for this new platform.

Arment also discusses the quandary faced by the many iPhone developers who are looking to move their apps to the iPad but have not had access to an actual device for testing. Consequently, developers have to either trust the iPad simulator in the iPhone SDK 3.2 and Apple's reviewers in order to have their applications ready for the iPad launch or hold off until the device comes available and have customers make do with iPhone versions of their applications for several weeks or months until iPad versions can be created.

For Arment, seeing the pixel-doubled display of the iPhone version of Instapaper Pro in the iPad simulator was enough to convince him that he needed to have an iPad version of the app ready to go as soon as possible.

It sucked, and it was completely unusable by my standards. I don't think I'll want to run any pixel-doubled apps on my iPad in practice.

As far as I'm concerned, Instapaper isn't really available on the iPad until it's native. (This also influenced my decision to make it a universal iPhone/iPad app: I don't want anyone subjecting themselves to the iPhone edition in pixel-doubled mode.)

As a result of this decision, Arment is prepared to accept that a few minor issues may exist with the iPad version of Instapaper Pro and that he can fix them soon after the device launches. But that risk is outweighed in Arment's mind by the opportunity to have an iPad-specific Instapaper experience from day one.