PCWorld reports on the results of its recent 13-city performance tests of wireless carriers in the United States, and Apple's iPhone partner AT&T came out well ahead of the pack in both upload and download speeds while also faring well in reliability.

After registering the lowest average download speeds in our 3G performance tests last spring, AT&T's network turned in download speeds that were 84 percent better than the numbers from eight months ago; in our latest tests, AT&T's download speeds were 67 percent faster on average than those of the other three largest U.S. wireless providers--Sprint, T-Mobile, and Verizon.

In looking specifically at the iPhone, AT&T again fared well compared to flagship handsets on other carriers, offering significantly higher download and upload speeds with 91% reliability, only marginally lower than the G1 on T-Mobile and the HTC Hero on Sprint. 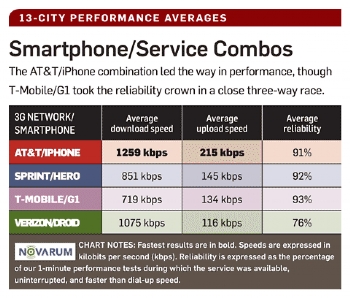 Overall reliability also improved for AT&T, with successful connections achieved on 94% of attempts, up from only 68% on the previous survey and on par with results for Sprint and ahead of T-Mobile and Verizon on an overall basis. PCWorld's testing did, however, reveal significant reliability weaknesses in San Francisco, with only 55% of connections being successful in its smartphone testing.